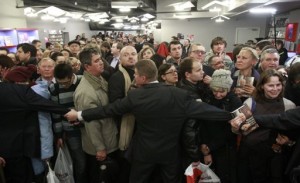 The Mass Media Inspection Service acknowledged that its mechanism for blocking websites ‘needs fine-tuning’, and promised to reinstate the more popular sites that had been added to its new blacklist, including Rutracker,org, the filesharing site, and Librusek, an online library.  Russian Railways will be fined $69 million by the Federal Anti-Monopoly Service over complaints that it created an artificial shortage of freight cars.  The Audit Chamber is alleging that billions of rubles allocated for infrastructure projects ahead of the Asia-Pacific Economic Cooperation Summit in Vladivostok were misused.  Prime Minister Dmitry Medvedev is the latest person to deny that Vladimir Putin is suffering from a serious back injury; he also stated that he backs the current political development of his country, praising its ‘active civil society’.  Putin apparently repeated his invitation to U.S. President Barack Obama to visit Russia during his congratulatory telephone call to the re-elected leader.  Sapiyat Magomedova, a female Daghestani lawyer, has been awarded the Per Anger prize in Gothenborg.

BP and AAR are attempting to end all of their legal disputes as joint shareholders in TNK-BP; BP just made a $325 million payment to AAR to end outstanding litigation in Stockholm.  The deal paves the way for BP to move towards closer ties with Rosneft, says Reuters.  TNK-BP won a deal to supply TGK-5 with $6 billion of gas over the next two decades.  Sources are calling the deal a ‘blow for Gazprom’.  Large shale gas deposit in Poland and Ukraine ‘threaten exports’ from Gazprom, but ‘shale oil could be a boon for Russia’.

Viktor Danilov, a physicist convicted of spying for China in 2004, has had his sentence reduced by three years, and will be freed in ten days.  Valentin Moiseyev, a diplomat who served jail time on charges of spying for South Korea, speaks to RFE/RL on Russia’s relationship with accused spies and argues that the system itself ‘sees enemies absolutely everywhere’.  A British Royal Navy submariner has been caught trying to sell secrets to Russia.  The governors of Tatarstan and Kaliningrad have been named as the most receptive regional leaders regarding business development.  The central bank is expecting domestic banks to post over $31 billion in profits this year.