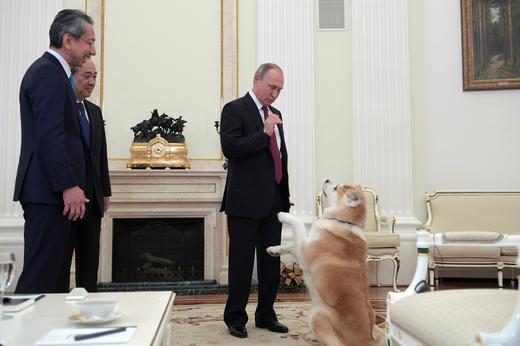 TODAY: Allegations of genocide in Aleppo dismissed by Defence Minister as ‘Russophobia’, Churkin says siege is over and city is under Syrian government control; Lavrov ready to work with ExxonMobil CEO Tillerson as US Secretary of State; Russians see no competition to Putin for presidency in 2018 as Navalny announces plans to run; WADA doping accusations dismissed; Putin takes his dog to Japan.

The UN’s human rights spokesman is reporting that civilians in Syria’s Aleppo have been detained or killed by government forces for trying to flee the city, or killed in their homes, as rebels reportedly await evacuation.  Local activist Lina al-Shami described the situation as genocide.  After the UN and US condemned Russia, Syria, and Iran for the atrocities, a spokesman for the Russian Defence Ministry dismissed the outcry as ‘theatrical screams’ of ‘Russophobic hot air’; he also claimed that the apocalyptic videos being posted on social media sites were all staged by terrorists.  Russia’s UN representative, Vitaly Churkin, says hostilities have now ceased and that the city is under the control of the Syrian government.  Foreign Minister Sergei Lavrov expressed Russia’s readiness to work with US President-elect Donald Trump’s Secretary of State nominee, Rex Tillerson, the CEO of ExxonMobil and long-time close ally of Russia, Rosneft head Igor Sechin, and Vladimir Putin.  It is expected that Tillerson’s appointment will lead to the lifting of anti-Russia sanctions, given that ExxonMobil has billions of dollars at stake over them.  A UK Labor MP thinks it is highly likely that Russia’s cyberwarfare targets this year included the Brexit vote.

The Levada Center’s latest poll says almost half of Russians believes that there will be no real challenger to Vladimir Putin in 2018.  Not if opposition leader and anti-corruption campaigner Alexei Navalny gets his way. Navalny has announced his intention to run for President in 2018 in a YouTube video in which he calls for ‘an honest conversation’, rather than ‘yet another fake television show’.  Russian source Itar-Tass quoted a ‘political expert’ who suggested Navanly’s announcement is part of a bid to influence his embezzlement retrial.  Life satisfaction in Russia is low, with a wavering appreciation of democracy and open market economics, a new survey finds.

Russia greeted the latest WADA doping accusations with dry, flat denials and accusations against their author.  Ahead of a summit with Japanese Prime Minister Shinzo Abe regarding the Kuril Islands, Putin embellished his early diplomatic meetings with some canine distractions.  He told German Chancellor Angela Merkel to expect delays of gas supplies to Europe via Ukraine this winter.

PHOTO: Russian President Vladimir Putin plays with his dog Yume, a female Akita Inu, before giving an interview to Japanese Nippon Television and Yomiuri newspaper at the Kremlin in Moscow, Russia on Dec. 7, 2016. Photo by Sputnik/Kremlin/Alexei Druzhinin via REUTERS