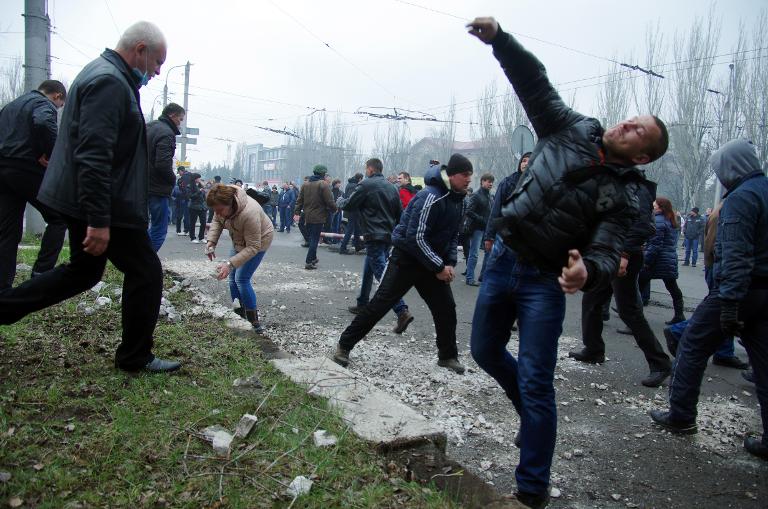 Pro-Russia separatists rioted at government buildings across Ukraine yesterday (including a police building in Horlivka), prompting US President Barack Obama to urge President Vladimir Putin to use his influence to persuade the separatists to stand down.  He was echoed by Germany and the UK.  The BBC has footage of skirmishes in Slavyansk, including an attack on a local journalist.  The Guardian has a useful timeline of yesterday’s events.  Both Putin and Foreign Minister Sergei Lavrov denied accusations of Russian involvement; Lavrov went so far as to say that Russia does not even have any intelligence agents in Ukraine. He also accused Ukraine of blocking Russian journalists from crossing its borders.  A leaked UN report on human rights in Ukraine claims that Russia tampered with the Crimea referendum.  A weatherman on state television channel Russia 24 spoke of a ‘gusty wind, possibly the wind of change’ over eastern Ukraine during his broadcast yesterday.

President Vladimir Putin will give himself a threefold pay rise, under a new decree, which also boosts the salary of Prime Minister Dmitry Medvedev.  Both the MICEX and the ruble fell yesterday.  Foreign depositors had removed 80% of cash they had deposited with Gazprombank as of last month.  Analysts are anticipating as much as a 4% contraction of the Russian economy this year if the West increases its current sanctions, as the EU and US are currently planning to do.  The creator of Dozhd (Rain), the last independent television channel in Russia, talks to the WSJ about capital flight, economic stagnation, and an ongoing brain drain: ‘In suffocating Ukraine, Putin’s really suffocating Russia.’  Bank Rossiya, sanctioned by the US last month, has been awarded the job of servicing payments on Russia’s wholesale electricity market.

The US military says a Russian fighter jet made twelve close-range passes near one of its warships in the Black Sea yesterday, taking the action as provocative.  Japan’s Defense Minister said Russian planes frequently have been flying near Japan.  Now that the Sochi Olympics have been carried off without a hitch, is Chechen leader Ramzan Kadyrov’s ‘untouchable’ reign about to come to an end?