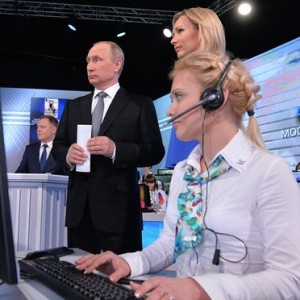 More than 3 million questions were apparently submitted to President Putin’s annual direct line question and answer session which offered little in the way of surprises, with the President mainly taking pains to assure worried citizens that Russia’s reserve funds were not on the verge of exhaustion and that GDP would grow by 1.4%.  ‘Putin this year was very focused on domestic issues’, professor Nikolai Petrov has observed, since ‘there’s a major electoral campaign and people are far more interested in what is happening at home than abroad’.  One caller addressed Russia’s lack of political pluralism, asking, ‘What’s the point in voting if the ruling party – United Russia – always wins?‘  You can find Putin’s answer here.  The President’s comments about the United States, the West, and Turkey were ‘tempered’, Bloomberg says (he called Obama a ‘decent person’ for admitting mistakes in Libya).  One commentator suggests that the President was in fact rather subdued: ‘he read economic statistics from a piece of paper, while previously he had made a point of demonstrating his impressive memory’.  The Guardian argues that Putin gave the appearance of leader on top of the key issues, ‘though that is hardly surprising given that there are almost no probing questions’.  A 12-year-old girl provided one of the more provocative foreign policy questions – whether Putin would save Ukrainian President Petro Poroshenko and Turkish President Recep Erdogan if they were drowning.  ‘If someone decides to drown, there’s no one that can help him’, he replied.  RFE/RL’s Brian Whitmore has identified his favorite Putin quote from the call in: ‘Siberia is safer than Brussels. Anyone who says otherwise will be sent there’.

Somewhat ironically, given that Putin assured two entrepreneurs he was working on stopping the harassment of business by government inspectors, the FSB has carried out a raid at the headquarters of billionaire Mikhail Prokhorov’s Onexim investment group whilst the police undertook one at the Russian headquarters of furniture maker IKEA.  The Investigative Committee reportedly has plans to question British-American investor William Browder about the murder of whistleblower Sergei Magnitsky. Two  leading opposition politicians, Ivan Zhdanov and Ilya Yashin, have announced their withdrawal from election primaries being organised by the PARNAS democratic coalition.  The Moscow Times investigates the possibility that the murder of a St Petersburg journalist was motivated by homophobia.