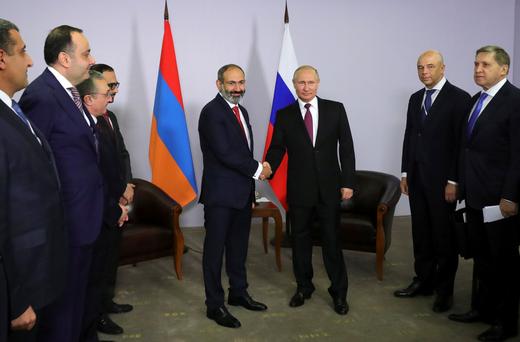 President Vladimir Putin hosted a meeting of the Eurasian Economic Union yesterday, which agreed to offer observer status to Moldova. On the sidelines, Putin met with the new Armenian Prime Minister, who wants to work on developing military and strategic ties; Putin described Armenia as Russia’s closest economic and security partner and ally in the Caucasus. Foreign Minister Sergei Lavrov hailed close ties with Egypt on security issues that will eventually restore direct air links. Writing in the Independent, a Moscow-based analyst rubbishes the notion that the Russian business community is a natural enemy of the West. Mary Dejevsky analyses the condemnation of Russia issued by the head of British MI5 yesterday, calling his attack “populist, direct, and far outside the diplomatic register”. Activists who demonstrated ahead of Putin’s inauguration earlier this month are calling for an investigation into why they were beaten by Cossacks and law enforcement officers during their protest. Russia’s Federation Council is compiling a report accusing major Western powers of actively attempting to keep Vladimir Putin from seeking the presidency since 2011 or earlier by concocting media scandals.

A new Levada Centre poll found that the majority of Russians do not feel that they have been negatively affected by Western sanctions, although they do note feeling increasingly isolated from the international community. Russia is investigating supportive measures but will not be buying stakes in sanctions-hit EN+ or Rusal, said Finance Minister Anton Siluanov; Rosneft may be given a credit line from Promsvyazbank for support, such as Viktor Vekselberg’s Renova Group has just received, to help it weather sanctions. In spite of sanctions, Rosneft has just signed a new contract with a subsidiary of French oil major Total. EN+ head Oleg Deripaska is giving evidence at the London High Court this week in his Norilsk Nickel share sale case against Roman Abramovich. Gazprom will spend around $1.3 billion in geological exploration this year.

Former Finance Minister Alexei Kudrin has been given a post at Russia’s public finance watchdog overseeing government expenditure; foreign investors are apparently disappointed that he has not been given an active role in the new government, as had been speculated. He promised to use his new post to create mechanisms to prevent corruption. Authorities in Nizhny Novgorod are attempting to get their World Cup stadium finished by offering to trade food and lodging with local workers in exchange for their labour. Germany is appealing to the Kremlin against Russia’s World Cup barring of one of its journalists, who uncovered instances of Russian doping in the past.