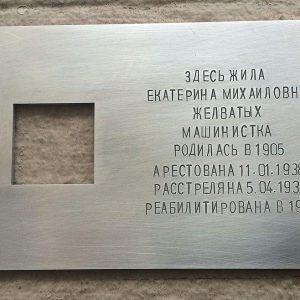 Human Rights Watch reports that a group of women visiting a village in Krasnodar were forced to register with the police after attempting to attend to a feminist gathering. Prior to this they reportedly received threatening messages from alleged Cossacks, lambasting feminism as an attack on traditional values. An activist in Arkhangelsk is facing charges for damage to cultural heritage after installing a memorial plaque on the home of a victim of Soviet repression as part of the ‘Last Address’ project, which honors the memory of those sent to Gulags. Graphic artist Victoria Lomasko has released a new book, translated into English, which portrays her encounters with Russia’s marginalised. American fantasy writer Victoria Schwab has spoken of her horror at realising that the Russian publisher of her fantasy series Shades of Magic heavily edited an LGBT storyline in fear of breaching the ‘gay propaganda’ law.  Activists from the Orthodox Church-linked Pro-Life all-Russia social movement have gathered one million signatures in support of a legal ban on abortion. ‘Russia is a country that can endure hardships like no other’: Forbes examines why sanctions against Russia are ineffective.

Foreign Minister Sergei Lavrov has announced a Russian-Chinese plan to deal with the North Korea crisis: the ‘rogue state’ would cease missile tests and the US and South Korea would halt large-scale military exercises; but is Moscow an honest broker? ‘Russia cannot help but look at North Korea as a crude analog of a divided Germany,’ says Maxim Trudolyubov in this op-ed, given that example, the prospect of regime change and possible, eventual reunification is most undesirable. Authorities in Kiev have refuted claims made in The New York Times that Pyongyang may have obtained rocket engines from a Ukrainian state-run factory, pointing the finger at Russia instead. A new rocket-propelled grenade never used by Ukraine has been identified in clashes in the Donbass, in apparent evidence of the direct involvement of Russia in Ukraine’s eastern regions. Libyan military commander Khalifa Hafta has met with Russia’s foreign and defense ministers on a trip to Moscow, prompting speculation as to whether Russia hopes to increase its influence in the North African state.

Reports on the number of troops being sent to Belarus for the Zapad military exercises have sparked fears of a Trojan horse situation – this article suggests, however, that there is nothing out of the ordinary. In the first half of 2017, the average life expectancy in Russia reached 72.4 years, the highest in history.