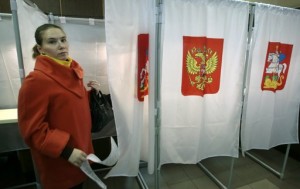 Gubernatorial election polls closed yesterday in five regions, with United Russia candidates expected to win all of them.  Opponents accused the Kremlin of removing competitors from races (in Ryazan, for example) and pressuring state employees to vote for its candidates.  Monitoring group Golos says it has reports of hundreds of violations, including for the mayoral race in Khimki, although the local head of Yabloko, Vyacheslav Medvedev, said he saw no evidence of falsification there.  Yevgenia Chirikova came second overall in Khimki, losing to United Russia’s Oleg Shakhov, and alleging ‘a massive falsification of the vote’.  Boris Berezovsky has agreed to pay $56 million towards Roman Abramovich’s legal fees after losing a court battle against him in August.

Rosneft is planning to build a $700 million oil pipeline from Mozambique to Zimbabwe.  This report looks at the conditions in Russia’s penal colonies.  Women in Tajikistan are facing a divorce epidemic: ‘Tajikistan is among the few Muslim nations where men can divorce their wives by repeating the word “taloq” – divorce – three times.’  Human Rights Watch has accused Syrian government forces of using Russian-made cluster bombs on civilians; Foreign Minister Sergei Lavrov denies this, saying that the illegal arms trade means that ‘it is very difficult to establish’ the origin of the bombs.

Following last week’s attack on a gay-friendly club in Moscow, Russian deputies and priests alike have spoken out against the gay community.  Human Rights Watch is urging the authorities to investigate the attack thoroughly, and says that new recent laws against homosexual propaganda ‘cannot but encourage attacks like the one last night’.

PHOTO: A woman votes at a polling station in the town of Khimki outside Moscow, Russia, Sunday, Oct. 14, 2012. (Mikhail Metzel, AFP)