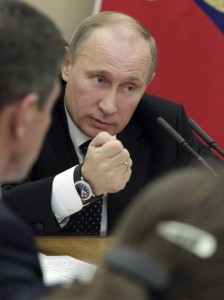 President Vladimir Putin has allowed ‘sweeping’  new amendments to the legal definition of treason to pass, with the new laws allowing Russians employed by international organisations to be tried as traitors, and, more broadly, putting ‘anyone who has contact with foreigners’ at risk of arrest.  U.S. organisation Freedom House said that the laws said the laws would ‘create an environment of fear’, and they were quickly denounced as Stalinist by rights groups, who said that it will be used to silence Putin’s critics.  Putin apparently promised to ‘take a more attentive look’ at the law, in response to the criticisms.  A separate law, ostensibly aimed at making the Internet safer for children, is drawing criticism for leading to the blocking of two popular sites, an online library and encyclopedia.  Putin was absent from the congress of a major business lobbying group this week, stirring rumours of his back ailment.  Foreign Minister Sergei Lavrov has condemned the bloodshed in Syria as ‘outrageous’, urging President Bashar al-Assad’s government to form a united front to end the current crisis.

The Magnitksy Bill is proceeding through the U.S. Senate, which is being merged with a bill that will grant normal trade relations to Russia – a full vote is expected later today.  Olga Stepanova, implicated in the original corruption case uncovered by Magnitsky, has now been implicated in a further tax-refund case, worth $130 million.  German Chancellor Angela Merkel is expected ‘to mend serious rifts in mutual ties’ with Russia this weekend during her meeting with President Putin.

MegaFon is planning to raise at least $1.69 billion with a London listing.  A spokesperson for Eurasia Drilling Co says that any large Russian acquisitions deals are looking unlikely.