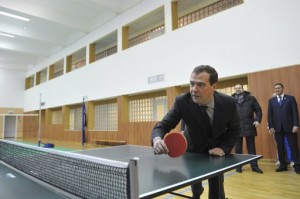 The Duma has returned from its New Year’s holiday, debating whether or not to abolish its ban on U.S. adoptions of Russian children. A Just Russia members Dmitry Gudkov and Ilya Ponomaryov submitted a bill that would eliminate the ban, but do not expect it to be approved, saying that it marks their agreement with the 130,000 people who signed a petition calling for the measure to be reversed.  Despite assurances from Dmitry Peskov that adoptions with court approval would be allowed to go forward, many families awaiting the adoptees are still in the dark.  The full list of officials that will appear on the U.S.‘s Magnitsky List has not yet been published, but Ramzan Kadyrov is apparently among those to be sanctioned.  Russia has granted a $1 billion loan to Bangladesh for as yet unspecified arms purchases.  Pussy Riot member Maria Alyokhina is appealing her sentence at a Perm city court today.  The victims have dropped their claims against him, but a Cambodian judge says he will keep open the probe into businessman Sergei Polonsky and his fellow travelers on the initial charges of malicious physical violence and deprivation of freedom.

Former politician and businessman Mikhail Yuriev says he’s switching his investments from the Russian to the U.S. energy industry due to cheaper financing, better infrastructure and support for foreign business.  Private oil and gas companies could be granted licenses for up to 20% of Russia’s continental shelf; Gazprom is said to be the only company that opposes the plan.  The Audit Chamber is to conduct an investigation into Gazprom’s spending, its first ‘thorough probe’  of the company in five years, to be completed by November.  Serbia says its Russian gas imports are too expensive.  The Far East Development Minister has reviewed the first draft of a plan to rescue the region’s economy.  The Central Bank’s ‘relatively hawkish’ position on inflation is leaving analysts guessing about its future moves on interest rates.  Russian Railways is suing Apple for $66,000 in damages for breach of copyright over exclusive rights to an iPhone app.  Car sales are expected to flatten in 2013 after a record year last year.

This week’s domestic murder case draws attention to Russia’s need for legislation on domestic violence, says RIA Novosti.  Russia is to resume its quest to send an unmanned probe to the moon in 2015.  The trial of Mr and Mrs Anschlag, the German couple accused of spying for Russia, began this week.