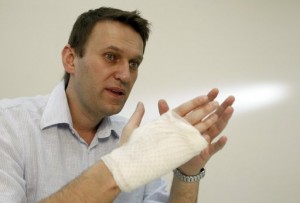 Anti-corruption blogger and opposition head Alexei Navalny says he fully expects a guilty verdict in the ‘absurd’ trial against him which, he says, was orchestrated by President Vladimir Putin.  ‘Everyone’s known for years that if Putin ever made the decision to shut me down, then he’ll shut me down.’  Billionaire politician Mikhail Prokhorov has brought attention to an interview given by Investigative Commitee spokesman Vladimir Markin, in which Markin admits that Alexei Navalny’s public profile has accelerated the inquiry against him: Prokhorov says that this statement alone would be enough to dismiss the entire case against Navalny ‘in any law-abiding state’.  Navalny has given an interview to The Wall Street Journal, in which he explains the effects of the trial on his family.  Masha Gessen comments on the closure of independent publication Bolshoi Gorod, noting that this is the latest of many independent Russian publications that have shut down in recent months.  Dmitry Peskov says that the investigation into the 2009 death of Sergei Magnitsky has been completed, and that the ‘competence’ of the investigators means that there is no need to review it.  Activists have launched an online campaign to demand the release of protesters arrested after last year’s Bolotnaya Square protest.

Presidents Vladimir Putin and Barack Obama will meet twice in coming months in efforts to ease current tensions.  Despite deteriorating relations, the Kremlin says the U.S. sent a ‘positive signal’ in the form of a high-profile Moscow delegation yesterday, carrying a ‘constructive’ letter from Obama.  Deputy Prime Minister Dmitry Rogozin says Russia has ‘solved the issue’ of penetrating the U.S. missile shield, and that it therefore poses no military threat, but ‘remains a political and economic problem’.  There is speculation that relations with Germany are also beginning to suffer, after a delegation of Chancellor Angela Merkel’s parliamentarians canceled a number of Moscow appointments last week.  Uzbek President Islam Karimov, who is visiting Moscow this week, has warned Vladimir Putin that the dangers of an intensifying radicalism in Central Asia could be of more serious consequence ‘than open war’.  He says that Russia’s influence in the region is a stabilising one.  Vladimir Putin sent his congratulations to new Venezuelan President Nicolas Maduro yesterday.

United Russia deputy Grigory Anikeyev took in earnings of $35 million last year, according to new income and property declarations.  Deputy Prime Minister Igor Shuvalov is one of the Kremlin’s top-earning officials, with a 2012 income of $7.3 million, apparently due to an overseas-based trust, whose funds are ‘being gradually transferred back to Russia’.

PHOTO: Russian opposition leader and anti-graft blogger Alexei Navalny speaks during an interview with Reuters at his office in Moscow, April 15, 2013. REUTERS/Sergei Karpukhin