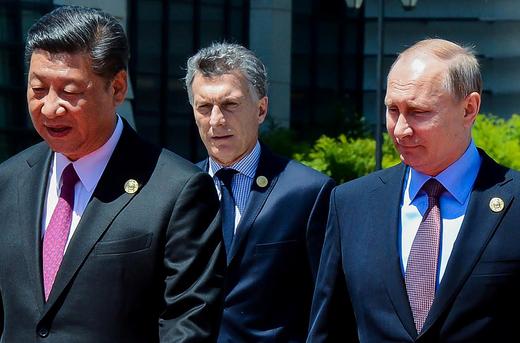 Speaking to reporters in Beijing, President Vladimir Putin said it is still too early to say whether or not he will seek reelection in 2018. He also spoke on the need for intelligence services to be wary of creating software that has the potential to be used for malicious means, and named the US intelligence service as the source of the WannaCry attack. Putin publicly pledged his support for China’s attempt to revive the Silk Road, and said that Russia would be an active partner in the project. The President also condemned North Korea’s latest missile launch, but urged foreign leaders against “intimidating” the country. Oil prices increased after Russia and Saudi Arabia said they were in support of an OPEC-led agreement to continue cutting output until March of next year. Putin personally backed the cut extension, and said that the success of the cuts will be driven largely by Saudi Arabia’s commitment to them. State Duma deputy Valery Rashkin appealed to the Prosecutor General to verify claims that Prime Minister Medvedev owns a secret empire amassed through corruption; the department replied that the appeal was “mistakenly directed”. Moscow’s City Court upheld the fine levied against opposition leader Alexei Navalny for organising an unauthorised rally in March, at which he was detained along with roughly 600 others.

The Washington Post is reporting that US President Donald Trump revealed highly classified information to Russian Foreign Minister Sergei Lavrov and his ambassador at their meeting last week, and that the disclosures put a key source of anti-terror intelligence in jeopardy. According to an unnamed US official, Trump “revealed more information to the Russian ambassador than we have shared with our own allies”. In response, US Secretary of State Rex Tillerson says Trump did not discuss “sources, methods or military operations” with Lavrov. Lawfareblog picks apart the details. Trump’s actions are victories for Russia, says this piece. “The United States is led by a man who doesn’t seem to grasp the limits a democratic state must put on a relationship with Russia,” says John Lloyd.

Russia may join the Paris climate agreement in 2019 “because this agreement poses no threat to our country”. A Kremlin-backed study has found that competition in the Russian economy is at a three-year low, with 14% of respondents seeing no competition at all in their industry.