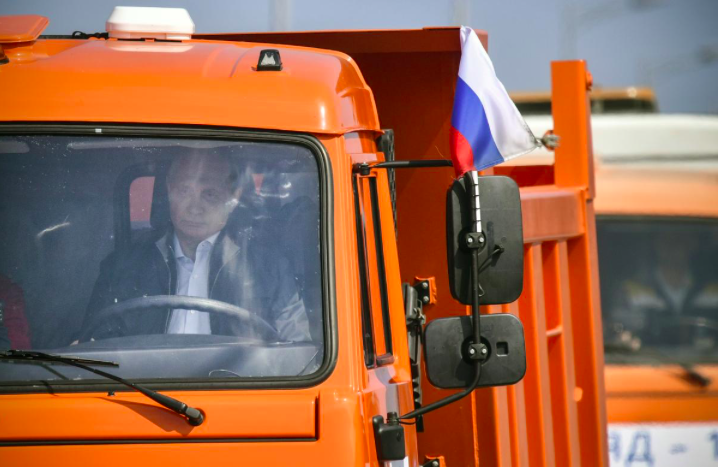 President Vladimir Putin drove a truck across the controversial new road-and-rail bridge linking Russia to its newly-annexed Crimean peninsula, for a celebratory ceremony broadcast on live television n which he called the bridge “a miracle”. His Ukrainian counterpart called the $3.6 billon bridge “illegal”; the US and European Union also condemned it. The EU has just sanctioned five people who, it says, helped organise Russian presidential polling stations in Crimea in March. Russia’s Human Rights Ombudsman announced that the Kremlin paid out $14.5 million to its citizens last year in compliance with decisions by the European Court for Human Rights. The ECHR’s latest ruling is that Russia must pay opposition leader Alexei Navalny $2,400 to compensate him for its unlawful refusal to issue him a passport. The embattled Navalny has been sentenced to 30 days in jail for his role in the mass protests held on the eve of Putin’s inauguration earlier this month.

Prime Minister Dmitry Medvedev’s “vision” of Vladimir Putin’s new government is that it should not change, because the existing government has already “proved its functional capacity”. Putin, who has said he is not interested in an arms race, announced that 14 missile regiments will receive the new Yars intercontinental missile complexes this year. He said that the new systems will significantly increase Russia’s military capabilities and security for decades. The head of the Security Council has flagged satanists as some of the bad influences vying for the attention of Russia’s youth. A Justice Ministry official told the UN that there are no gay people in Chechnya.

Anti-virus software creator Kaspersky Labs, caught in cybersecurity crossfire, is relocating its significant operations to Switzerland to avoid interference from Moscow. Following international pressure, Russia has issued a visa to the German journalist initially barred from the World Cup. If you are curious to see the calibre of Russia’s targeted Facebook ads from 2016, the New York Times compiled a selection.

PHOTO: Russian President Vladimir Putin drives a Kamaz truck during a ceremony opening a bridge, which was constructed to connect the Russian mainland with the Crimean Peninsula across the Kerch Strait, May 15, 2018. Alexander Nemenov/Pool via REUTERS