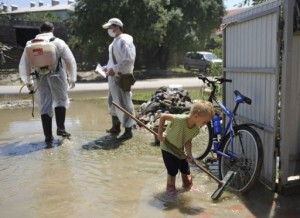 The State Duma passed a number of anti-free speech laws last week – libel is now a criminal offence.  ‘The purpose of this law is not to defend the honest name of people, but to worry journalists and bloggers who are trying to uncover things that are inconvenient for the authorities,’ says one journalist.  PACE delegate Andreas Gross criticised the law, arguing that ‘everybody needs critics in order to learn’.  Responding to the Duma’s passing of the law on NGOs, Lyudmila Alexeyeva says that the ‘foreign agent’ label that Russian rights groups will be forced to accept is ‘disgraceful’, and says that her Moscow Helsinki Watch group will stop accepting foreign funding when the new law comes into effect.  The chief of rights group Memorial says that there has been ‘absolutely no progress’ in the case of Natalya Estemirova in the three years since her murder, blaming ‘sabotage’.

Vladimir Putin has returned to the flood-stricken city of Krymsk to meet survivors and boost his reputation, which has been damaged by accusations of neglect and insufficient response to the disaster.  The governor of the Krasnodar region says rebuilding the city will cost $275 million, and 5,000 troops are to be brought in to facilitate the process.  There is talk that current Presidential term limits could be extended.  Ukraine’s Emergency Situations Minister has criticised Vladimir Putin and his delegation for rudeness and lateness: ‘Dreadful impressions. There was a great deal of bad manners.’   The Foreign Ministry’s denigration of Saudi Arabian human rights in response to a clash between protesters and police has drawn ire from the Kingdom, who called it ‘a blatant and unjustified intervention’.

Hacker group Anonymous says it has hacked the servers of five major oil companies operating in the Arctic, including Gazprom and Rosneft, in a bid to stop oil and gas drilling.  Mikhail Fridman has indicated that TNK-BP would be willing to sell its stake to BP for cash to put an end to years of shareholder conflict.  Global PR firm Edelman is closing its Russian operations.

PHOTO: A boy cleans a bike while workers disinfect flooded areas in the town of Krymsk, Russia on July 10, 2012. (AFP Photo/Mikhail Mordasov)