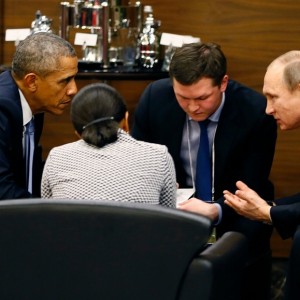 President Vladimir Putin sent his condolences and pledge of assistance to French President Francois Hollande in the wake of Friday’s terror attacks in Paris.  Various Kremlin officials, including the President, said the attack emphasises the need for the West to stop isolating Russia and instead cooperate with it in taking on Islamic State terrorists in Syria, but Dmitry Peskov says it is too early to talk of rapprochement.  The attacks shift the political focus away from Russia as a growing threat and towards its role as a potential partner, says the WSJ, but world leaders at the G20 were urging Putin to end the Syrian civil war and reach a deal with Islamic State.  Putin had a 20-minute, private meeting with his US counterpart, Barack Obama, on the sidelines of the G20 meeting in Turkey yesterday.  The White House says the pair agreed that the United Nations would mediate negotiations between the Syrian regime and opposition.  Almost half of Russians are fearful of a terrorist attack in the near future, says the Levada Center.  Russia shares China’s view on the global equality of all states, whether rich or poor, says Putin.  European Council President Donald Tusk notes that Russia’s actions in Syria are increasing the number of refugees trying to reach Europe.

Activists sent coffins down the Moscow River last week, each painted with the name of a different bank.  The 2016 budget passed in its first reading, and will ‘depend less on oil revenues’, but was written with $50 oil in mind and may need to be amended if prices see further depletion.  The Kremlin has issued new guidelines for press covering military meetings – including the stipulation that cameras must be pointed at the wall until the President arrives – in the wake of ‘leaked’ information about Russia’s most recent weapons project.  Yandex has requested that the EU conduct an investigation into Google over suspected anti-trust practices related to pre-installed Android apps.

Russia may seek to get around an athletics ban by requesting that its athletes be allowed to compete under an Olympic banner, rather than the Russian flag.  Bill Browder launched the Sergei Magnitsky Human Rights award at a top-secret event in London over the weekend.