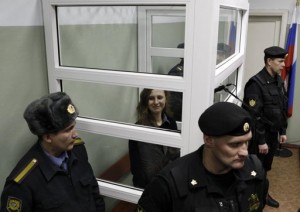 Prime Minister Dmitry Medvedev pressed the Cabinet to ensure ‘sustainable economic growth of at least 5 percent’ per year in coming years, a level of growth not seen since 2008; the Deputy Economic Minister said that 4% growth could be possible with ‘serious changes’.  Prior to Medvedev’s call, Central Bank chairman Alexei Ulyukayev made contradictory remarks, stating that ‘economic growth roughly matches its potential’.  Ulyukayev also said that capital outflows of $10 billion every quarter are ‘acceptable‘ and to be expected when the bank isn’t buying currency.  Jailed Pussy Riot member Maria Alyokhina lost her appeal yesterday to be released and have her sentence deferred so she could care for her young son.  ‘I would be very tempted to mention Gogol, Kafka and Orwell at this moment,’ she said, in response to the reprimands she has received since being imprisoned.  Dmitry Sverdlov, a Moscow priest who supported Pussy Riot, has been suspended from service for five years, after his earlier request to be relieved of his post for ‘chronic fatigue’ was refused.  State-owned Inter RAO has fired Marat Davletbayev, a midlevel executive, for participating in opposition party politics outside of office hours.  Nikolai Ryabykh, the acting head of the Defense Ministry’s logistics department, has been detained as part of the Investigative Committee’s ongoing Oboronservis fraud case, in which former Defense Minister Anatoly Serdyukov is now a witness.

Brian Whitmore wonders whether ‘technocrat‘ and Justice Minister Aleksandr Konovalov’s opposition to recent legislation on foreign-funded NGOs will lead to his performance being downgraded.  A Moscow city court ruled that money laundering claims against former Yukos heads Mikhail Khodorkovsky and Platon Lebedev were ‘overstated’ by the Khamovniki District Court, which wrongfully included $185 million in its total.  A U.S. judge is fining Russia $50,000 a day until it complies with his earlier order to return the historical books and documents of a Brooklyn-based Jewish group.  The case against organisers of the 2011 MMM financial pyramid has been closed due to lack of evidence.

According to a Levada Centre poll, only a quarter of Russians think Lenin’s body should remain in its mausoleum in Red Square.  The BBC gets a glimpse inside the Kremlin.

PHOTO: A member of the female punk band “Pussy Riot” Maria Alyokhina listens to the verdict inside a defendants’ box during a court hearing in Berezniki in Perm region, near the Ural mountains, January 16, 2013. Jailed Pussy Riot punk band member Maria Alyokhina lost an appeal to a Russian court on Wednesday to be freed from prison and defer her sentence to care for her five-year-old son. REUTERS/Sergei Karpukhin