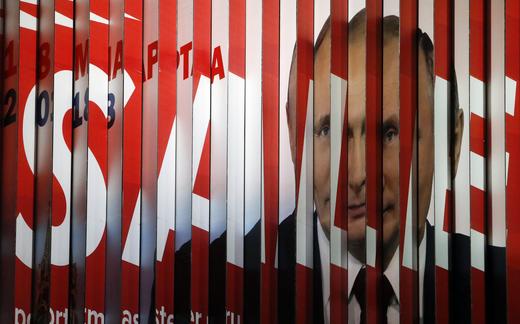 Kremlin aide Andrei Belousov has discussed the government’s plans to boost domestic spending this year on health, education and infrastructure by an extra 1.5-2% of GDP. The World Bank CEO says Putin’s next presidential term will be a perfect opportunity to bring these new spending plans forward. Leonid Bershidsky names Vladimir Putin’s only opposition candidate as “the Whatever vote, which is part protest and part shrug,” and independent pollster the Levada Centre’s last prediction for turnout was 52-54%; with Putin’s win guaranteed, the only weapon true oppositionists have, he says, is apathy. Nonetheless, the Communist Party’s presidential candidate, “dark horse” Pavel Grudinin, is expected to draw some voters to the polls. Ksenia Sobchak made a dramatic entrance in the middle of an Ekho Moskvy interview with Alexei Navalny’s campaign manager, Leonid Volkov, accusing him and his team of spreading lies about her. Independent pollster the Levada Centre, barred from publishing polls related to national votes, will release its data after the vote in order to avoid charges of meddling (despite the fact that its head, Lev Gudkov, says the accusation that it received foreign funding at all were “complete garbage”).

During his annual press conference this week, Foreign Minister Sergei Lavrov accused the US of harbouring a secret plan to place weapons in space, noting its failure to join talks with China on the matter. The Children’s Ombudswoman, Anna Kuznetsova, is saying that the knife attack this week at a Perm school could have been avoided if state agencies had acted on parents’ concerns. The house arrest of director and Gogol Center artistic director Kirill Serebrennikov has been extended again, for another three months, leading up to his $2.3 million embezzlement trial. Dozens of Russia’s prominent actors and directors are calling for the charges against him to be dropped. “Serebrennikov’s case embodies the new conflict between the Russian state and the creative elite,” says the Moscow Times. Temperatures in Yakutia have dropped to minus 67 degrees Celsius (minus 88.6 degrees Fahrenheit).

Russians are consuming 80% less alcohol than they did 5 years ago. The FT reviews Bruno Maçães’ new book about Eurasia, noting that both Russia and China are “already thinking in Eurasian terms”, and that the EU would do well to follow suit. The number of Russian tourists traveling to Japan has risen by over 40% since last year. Communist politician and 1990s Yeltsin opponent Viktor Anpilov, has died aged 72 of a stroke. Central Bank head Elvira Nabiullina will not attend the World Economic Forum in Davos this month.

PHOTO: A multi-sided transformable board, which advertises the campaign of Russian President Vladimir Putin ahead of the upcoming presidential election, is on display in a street in Moscow, Russia January 15, 2018. REUTERS/Sergei Karpukhin