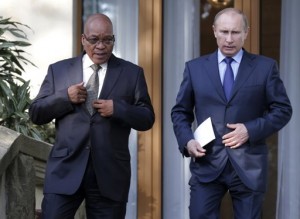 Vladimir Golubkov, the head of Société Générale’s Russian unit Rosbank, has been charged with commercial bribery following his arrest earlier this week and could face seven years in prison if convicted.  As ‘one of its core markets’, Société Générale says it is committed to Russia in spite of the scandal.  Golubkov’s former boss, Mikhail Prokhorov, is requesting his release, ‘because I think people accused of financial crimes should be released on bail, not placed under arrest’.  Golubkov denies the accusations, with many saying that footage of him shown with ‘cash piled on his office desk’ may have been a set-up.  A new ban on officials keeping foreign bank accounts has not led to any leadership-level resignations, according to Kremlin spokesman Dmitry Peskov.  Economic growth in the first quarter progressed at likely its weakest rate since 2009.  U.S. ratings agency Standard & Poor’s is warning of more harsh times ahead for Russia if the Kremlin does not do more to boost the investment climate and push for reforms.  Bloomberg sees Vladimir Putin’s attitudes towards the Rusnano and Skolkovo projects as an indication that ‘Maintaining power is more important than modernizing the economy’.  Putin is to begin using a helicopter to fly to work, in a bid to appease motorists angry over motorcade traffic jams.

Organisers of several planned gay pride events are appealing to a Moscow court over City Hall’s refusal to authorise their events, which many see as part of a long history of the city’s hostility to gay rights.  St. Petersburg’s gay rights activists will hold a rally today to mark the International Day Against Homophobia, likely a test of the city’s new laws against ‘homosexual propaganda’.  Russians are confused over a new viral video supposedly warning against corruption, but seemingly encouraging vigilantism.  Draft legislation seeking tougher punishments for blasphemy ‘are leading us back to Peter the Great’s times’.  Alexei Navalny alleged in court that a witness who testified against him had previously been accused – by Navalny himself – of being part of a corruption scheme.

A Cyprus bank run earlier this year saw $4.67 billion leaving Cypriot banks, most of it belonging Russian companies.  The FSB says it warned the U.S. in 2011 against recruiting its security agents as spies.  Rosneft and PetroVietnam have signed a memorandum of understanding to strengthen oil and gas cooperation.