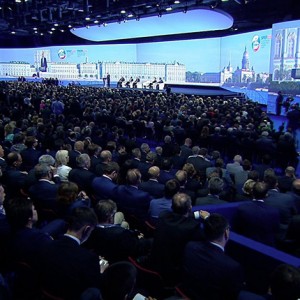 The St. Petersburg International Economic Forum opened yesterday, welcoming 10,000 visitors to the biggest economic event in the Russian calendar, amongst them European Commission President Jean-Claude Juncker, who defended his decision to attend by arguing it was sensible to maintain dialogue with Moscow despite tensions that remain over the Ukraine crisis.  In an opening ceremony speech, U.N. Secretary-General Ban Ki-moon praised Russia’s mediation work in Ukraine and asserted, ‘we need to strengthen communication and build bridges, rather than build walls’ – comments which have apparently enraged Kiev.  Former French President Nicolas Sarkozy, who had an informal dinner with Putin prior to the forum, suggested that sanctions should be lifted, but ‘the strongest’ (Russia, to his mind) ‘must offer his hand first’.  Russia is anticipating a major privatization drive to shore up the budget deficit; VTB’s chief Andrei Kostin is confident the state’s share in the bank may be appealing to long-term investors willing to wait for sanctions to be lifted.  Another of the forum’s offerings is that former Finance Minister Alexei Kudrin does not believe Russia can depend on a rebound in oil prices, but needs to work on strengthening institutions.  As a result of the ‘politicisation’ of the energy sector, Lukoil may be forced to sell its assets in Europe.  Russia may have to tap one of its sovereign wealth funds, the National Wealth Fund, destined for future pension needs, to cover budget gaps next year.  The Kremlin has used the SPIEF as an occasion to unveil the world’s most powerful icebreaker, its Arktika, which ‘is the length of two football fields, can break through ice 13 feet deep, features not one but two nuclear reactors, and is an unmistakable signal of Russia’s intent to challenge America’s global military dominance’.

The Ukrainian parliament has requested that Constantinople recognize the Ukrainian Orthodox Church’s independence from Russia, as the church seeks to uncouple itself from ‘an aggressor state’.  In the latest verbal spat on Syria, Washington has expressed ‘serious concern’ over reports of Russia of carrying out air strikes in southern Syria against rebels, including forces backed by the United States, that are battling the Islamic State group.  The World Anti-Doping Agency alleges that hundreds of attempted doping tests have been scuppered by Russian authorities and athletes.

In Ekaterinburg, homophobic football fans reportedly attacked an LGBT nightclub after Russia’s loss in their match against Slovakia.  ‘It may never be clear whether Moscow was behind – however distantly – the violent behaviour of Russian so-called hooligans in the game against England’, says a Guardian editorial, but, ‘there is a pungent whiff in the world of Russian football fans that says something sinister about the general state of Russia’.