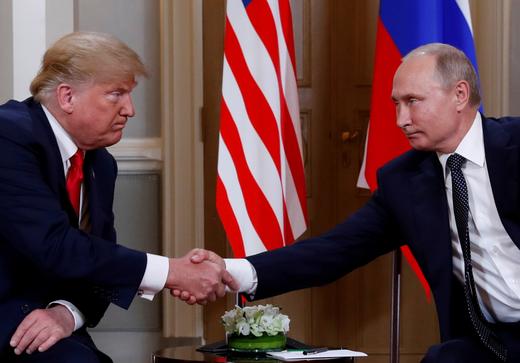 Despite claims that their meeting “did not seem to have much substance”, US President Donald Trump’s summit with President Vladimir Putin in Helsinki yesterday (full transcript here) created a media hurricane of bipartisan shockwaves and disbelief amongst intelligence and law enforcement officials alike, due to Trump’s refusal to blame Putin for Russia’s 2016 election meddling. “President Putin was extremely strong and powerful in his denial today,” Trump said. A former director of the CIA called Trump’s stance “treasonous”, although of course it won praise from Putin who called him a “competent person” who “can listen to and understand the line of reasoning”. Republican Senator John McCain commented, “No prior president has ever abased himself more abjectly before a tyrant”; Foreign Minister Sergei Lavrov, on the other hand, called the meeting “better than super” and “fabulous”. Both sides agreed on the need to counter the threat of terrorism, as well as on a plan to secure Israel’s border with Syria, and Putin said he told Trump that Russia is prepared to extend the Strategic Arms Reduction Treaty (START) once both sides have agreed on the specifics. Speaking to Fox News after the meeting, Putin blamed current poor relations on “internal political games” in the US. He insisted that Russia is doing its best to bring the killers of popular political opponents such as Anna Politkovskaya and Boris Nemtsov to justice. “Haven’t presidents been killed in the United States?” He also said that Russia has no compromising materials on Trump because it doesn’t have the resources to organize surveillance of all of the foreign businessmen that visit. “[B]efore he announced that he will run for presidency, he was of no interest for us.”

A 29-year-old Washington, D.C.-based woman from Russia has been arrested and charged with acting as an agent of the Kremlin. The four protesters from Pussy Riot who ran onto the field wearing fake police uniforms during the World Cup final have all been jailed for 15 days. The UK’s media regulator Ofcom found that state-funded news network RT broke the British broadcasting code by falsely presenting the views of its own staff as those of viewers. Billionaire Alisher Usmanov’s phone carrier MegaFon is planning to delist from the London Stock Exchange and go private. Usmanov’s mobile phone retailer Svyaznoy has added electric vehicles to its line, potentially meaning a doubling of Russian sales for carmaker Tesla. During his time in prison, Alexei Navalny’s brother Oleg became a protest tattoo designer.

German Chancellor Angela Merkel is acknowledging the need to ensure that Nord Stream 2 does not damage Ukraine’s status as a transit country for Russian gas; Putin says Moscow will only agree if Gazprom and Naftogaz settle their ongoing dispute. “Yet circumventing the Ukrainian network is precisely what Nord Stream is about,” notes the FT. France will shut its Business France trade agency in Russia due to long term disputes with Moscow authorities.