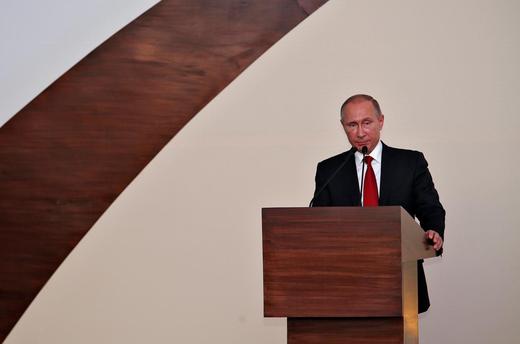 TODAY: On BRICS summit sidelines, Russia and India sign deals worth billions, Rosneft group to buy Essar Oil; Merkel wants stepped up sanctions, US and Britain also considering extensions; Syria talks again fail to produce results; Putin warns Russian journalists that they are being watched by US spies; Rosneft may make privatisation ‘real’ by buying back its own shares, says Putin.

Meeting in Goa prior to the start of the BRICS summit, Russia and Indian leaders signed various defence deals, with India purchasing Russian military equipment worth billions of dollars, and pledging to construct two new nuclear reactors at the existing power plant in Tamil Nadu.  In what is now India’s largest ever foreign takeover, it was also agreed that India’s Essar Oil would be sold for $12.9 billion to a group led by Russia’s Rosneft.  VTB head Andrei Kostin explained why the momentous deal does not go against Western sanctions currently in place against the firm. Indian Prime Minister Narendra Modi praised the ‘truly unique and privileged relationship’ between India and Russia. German Chancellor Angela Merkel wants European Union member countries to join together to increase sanctions against Russia over its role in Syria.  Britain and the US are also considering extending existing sanctions in a bid to force Russia to ease up on the bombing of Aleppo.  Ivo Daalder says containment is the only way to affect Russia because the economy is its ‘greatest vulnerability’.  Putin on Friday ratified an agreement with the Syrian government that gives Russia indefinite use of the Hmeimim air base.  A four-and-a-half-hour meeting between Russia, the US, and seven mediators regarding the Syrian war ended without agreement.

Speaking on the sidelines of the BRICS meetings this weekend, President Vladimir Putin warned Russian journalists that they may be being watched by American special services, and again dismissed US hacking allegations as campaign rhetoric, saying that US threats to retaliate against Russian hackers only confirmed that Washington is the one using cyberattacks for political gains; although he expressed hope that ties would be restored after the US presidential elections.  One analyst suggests that the current sour relations between Russia and the US are the West’s fault, for failing to acknowledge post-Soviet Russia as a new entity, and instead continuing the narrative of it ‘as the principal focus of Western distrust’.

Rosneft may buy back some of its shares from the government this year to resell at a later date, if enough buyers do not purchase them beforehand. Putin said such a move would make the privatisation ‘real’.