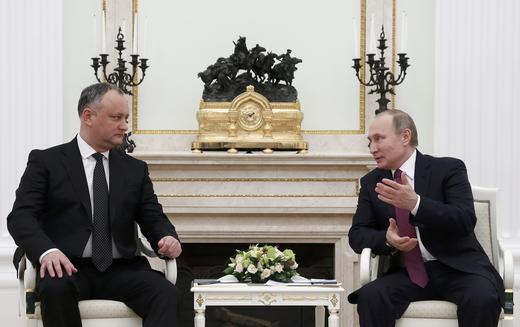 President Vladimir Putin spoke at some length about the recent sensational allegations regarding U.S. President-elect Donald Trump’s time in Moscow in 2013, making many lavish denials, and saying that the allegations are clearly false and an attempt to delegitimise Trump. Putin also referred to Moscow’s sex workers as ‘girls of reduced social responsibility’, and then praised them as ‘without a doubt, the best in the world’. He then said that whoever is behind this ‘hoax‘ is ‘worse’ than them.  Lithuania is planning to build a two-meter high wire fence along its shared border with Russia’s Kaliningrad which, as its Interior Minister acknowledged, would not actually do anything to prevent a military assault, but rather ‘underscores’ its citizens’ concerns about Russia’s potential.  Reuters discusses Russia’s apparent turn towards Libya.  During a visit to Russia, the President of Moldova says the country may scrap its trade agreement with the European Union because ‘we gained nothing’ from it. Gazprom is expecting Ukraine’s Naftogaz to give it $5.3 billion for gas it did not buy under a take-or-pay clause (Ukraine has not bought gas from Russia since November 2015).

The European Court of Human Rights is ordering Moscow to pay damages to the American families it blocked, mid-process, from adopting Russian children during its 2012 ban on the adoption of Russian children by U.S. applicants; the court ruled that then ban constituted unlawful discrimination as it was based on nothing other than nationality.  Foreign Minister Sergei Lavrov had a lot to say yesterday at his annual news conference: against the deployment of NATO troops in the Baltic, against the Obama administration for trying to block Japan and Russia from improving ties, in favour of Russia’s intervention in Syria (which apparently saved Damascus), and against the veracity of Russian cyber attack allegations.  Outgoing U.S. Ambassador to the U.N., Samantha Power, accused Russia of ‘tearing down’ the current world order.

State-owned VTB is considering paying out 90% of its 2016 profit in dividends. The bank’s chief, Andrei Kostin, told reports he was certain U.S. sanctions against it would be eased this year. Russia saw net capital outflows of $15.4 billion last year, considerably less than 2015.