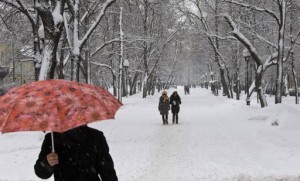 The new U.S. Defence Secretary, Chuck Hagel, says that the U.S. intends to scrap part of its planned European missile defence shield in favour of deployments against a possible threat from North Korea. The shield has been a major ongoing point of contention with Russia, but in response, the Kremlin says it sees ‘no concession’ in the decision.  Foreign committee head Alexei Pushkov says that the news will not dispel Moscow’s concerns about the shield.  Opposition activist Mitya Aleshkovsky was detained, threatened, and strip-searched at St. Petersburg’s Pulkovo Airport last week after refusing to stop videoing an arrivals hall interview, but blamed the incident not on his gay rights and activist work, but on the police having ‘a poor grasp of the law’.  The New York Times says that accusations of treason against Dmitry Gudkov, made in the wake of his visit to Washington earlier this month, is part of ‘a striking move to purge the Russian Parliament of even the faintest of contrarian voices’.  The WSJ reports on the recent suicide of Alexander Dolmatov and places it in the context of a wider Kremlin crackdown on dissident voices that includes heavier penalties for attending demonstrations and criminal investigations against opposition leaders.  The investigation of the home of Kirov Governor Nikita Belykh carries a message, says this report: ‘Toe the line or lose your job.’  Alexei Navalny has announced The Opposition Coordination Council’s plans to hold two mass rallies in April and May.

Oleg Deripaska says that if Russia’s justice system worked correctly, Pussy Riot would have been sentenced to 15 days’ community service, and says that the FSB is now double the size of the Soviet KGB.  The Kremlin apparently has begun dispatching FSB operatives to Abkhazia, South Ossetia and Kyrgyzstan for up to six months.  Russia is planning to send a permanent flee of warships to the Mediterranean Sea.  President Vladimir Putin has signed a law that bans foreign banks from opening branches in Russia.  The Duma has passed a second reading of a bill that would impose fines for the use of curse words in mass media.  Following its successful selling out of TNK-BP, Alga Group is planning its next investments.

The Guardian revisits the mystery death of Alexander Perepilichnyy, who fled Russia following the death of Sergei Magnitsky and handed over details of suspected fraudulent Credit Suisse accounts to Magnitsky’s employers, Hermitage Capital.  Britain’s MI6 reportedly paid at least $136,000 to former Russian spy Alexander Litvinenko.  easyJet has received permission to begin flying between the U.K. and Moscow.  ‘[H]omophobic freaks like [Vitaly] Milonov aren’t a solely Russian phenomenon. They can be found all over the world, from Alaska to Kamchatka. The problem in Russia is that Milonov isn’t an exception.’

PHOTO: People walk along a snow-covered boulevard in Moscow, Russia, Friday, March 15, 2013. A heavy snowfall has continued for the second day in Moscow with temperatures hovering around 0 degrees Celsius. (AP Photo/Misha Japaridze)