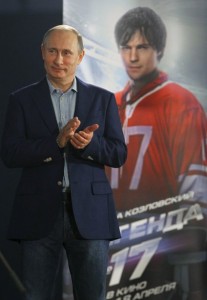 Prime Minister Dmitry Medvedev addressed the Duma yesterday for the first time in a year yesterday, fielding attacks from a number of deputies who lambasted the cabinet for working inefficiently.  Their comments echo those of Vladimir Putin, revealed in a video leaked just before Medvedev’s address, where he “rants” at senior officials for “worthless” work, sparking speculation of a cabinet reshuffle.  Medvedev did warn that Russia could fall into a recession due to falling commodity prices, and that the government was considering stimulus measures to push growth, but that it would stick to its fiscal rule to base spending plans on long-term oil price.  Elvira Nabiullina suggested that Bank Rossii should use monetary and credit policy to stimulate growth.  Deputy Finance Minister Sergei Storchak said that Russia’s G-20 plan would have different debt targets for different countries depending on economic conditions.  Hundreds of people rallied in Moscow yesterday in support of lawyer and anti-corruption blogger Alexei Navalny, whose trial has been postponed for a week.  Konstantin Sonin says that the fraud case against Navalny: “diverts enormous human and material resources from the more pressing fight against crime and corruption.”  Meanwhile a further criminal case has just been opened against Navalny and his brother Oleg.

The Duma is planning to discuss a bill that would lift its ban on the U.S. adoption of Russian children, although it is “unlikely to be passed”, and talks with the U.S. on the matter are reportedly making little progress.  The two countries have agreed to establish regular dialogue on the protection of rights of Russian children already adopted into U.S. families.  The Washington Post sees the U.S.’s failure to add Ramzan Kadyrov to its Magnitsky List as an example of “President Obama’s questionable catering to the Kremlin“.  Hermitage Capital head and former employer of Sergei Magnitsky, William Browder, has been placed on an international wanted list in connection with a Gazprom embezzlement case.  United Capital Partners has agreed to buy 48% of social network Vkontakte.

Madonna may be banned from returning to Russia after speaking out in support of Pussy Riot during her last tour. Human Rights Watch is calling for the release of Krasnodar activist Mikhail Savva.  Residents of Sochi have protested against a new tender offering 1.7 million rubles for the capture and extermination of the region’s stray dogs and cats before the Olympics.  A ban on new buildings is being imposed in Sochi to fight illegal construction.