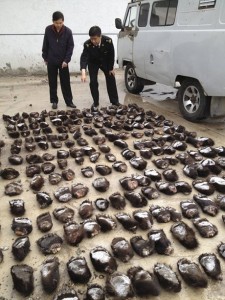 New allegations leaked by Edward Snowden, that the U.S. intercepted former President Dmitry Medvedev’s communications during the 2009 G20 summit in London, has provoked among Russian officials feelings of deepened mistrust with the U.S. British intelligence officials were also implicated in the row, with a former aide to then-PM Gordon Brown saying, ‘We always assumed that everyone else did it at such meetings.’  Convening this week in Northern Ireland, G8 officials have largely given up hope of a shift in Russia’s Syria position, with some saying that Russia should not be included in the discussions due to its support for President Bashar al-Assad’s regime.  Canadian Prime Minister Stephen Harper commented, ‘Let’s be blunt […] this is the G7 plus one.’  U.S. President Barack Obama met with President Vladimir Putin on the summit’s sidelines, where both pledged to sign an agreement preventing the spread of nuclear weapons.  Russia has announced that it will not allow a no-fly zone over Syria as it would ‘violate international law’.  Opposition leader Alexei Navalny appeared in court yesterday for his first cross-examination at the KirovLes trial, during which he denied ‘absurd’ charges that he stole timber from the company in 2009, arguing that they ‘contradict the actual circumstances of the case’.

Mikhail Fridman’s Alfa Group has set up a London-based oil and gas investment company L1 Energy, which looks set to invest $20 billion over the next five years – half of it with funds from the sale of TNK-BP.  Russia is planning to delay its privatisation program and keep its hold on Rosneft, Sberbank, and VTB for longer, to the disappointment of investors.  A subsidiary of Sberbank has announced that it will open a $2.2 billion credit line to Vladimir Potanin’s holding company, Interros.  Coal miner Sibanthracite is to list in London, with plans to offer 25% of its share capital.

Corruption, media censorship, and persecution of political opposition are worsening in Central Europe and Central Asia, according to a new report by Freedom House, arguing that Vladmir Putin has set an example for other autocrats in the region.  Vladimir Ryzhkov writes of the ‘complete lack of suspense’ over the upcoming Moscow mayoral elections, anticipating a win for Sobyanin and, for Navalny, a failure to gain the number of signatures required in order to run.  Gay rights activists want athletes and spectators to boycott the 2014 Sochi Winter Olympics to protest recent laws outlawing ‘homosexual propaganda’.