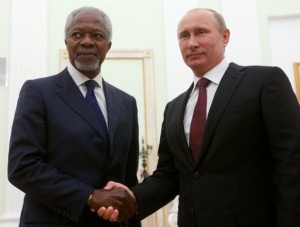 Vladimir Putin’s meeting with Kofi Annan, aimed at agreeing on a resolution of the Syria conflict, has produced some optimistic-sounding rhetoric, but no concrete outcomes, with Foreign Minister Sergei Lavrov saying only that Moscow is ready to seek consensus, Annan reporting ‘a very good discussion’, and Putin promising ongoing support for the UN’s peace-promoting efforts which, he says, Russia has backed ‘from the beginning’.  Bloomberg says the situation is nearing a ‘showdown’, as all eyes are on Russia to see whether it will use its veto in the next Security Council vote on Syrian sanctions, scheduled for this afternoon.  ‘Russia has backed itself into a corner over Syria by refusing to allow a UN mission that would have the power and means to defend itself.’  Meanwhile fighting in Damascus has reached ‘a new intensity’.  China continues to criticise intervention: ‘Several wars in this century prove that ‘promoting democracy’ and ‘humanitarianism’ are just a pretext for foreign powers to seek private gain.’

A group of men who interrupted a public meeting in Krymsk to accuse authorities of hiding the true death toll of the flood have been placed in custody.  A woman set herself on fire in United Russia’s Novosibirsk office this morning.  Russia may export as little as 10 million tons of wheat this year – less than half of last year’s volume, as this year’s grain crop is anticipated to decline to just 82 million tons due to drought.  Russia’s leading grain analyst has cut his forecast for this season’s crop by ‘several million tons’, as has the Agriculture Ministry, although is says that domestic prices will stay level thanks to reserves.

Reports say that private banks NOMOS and Otkritie are conducting talks about a potential merger: BSR has some analysis on current speculation.  The FT notes that ‘[t]his is not the first time Nomos has been linked to an acquisition target.’  Russian senator Vitaly Malkin and his delegation have been confronting U.S. leaders over the Magnitsky Bill.