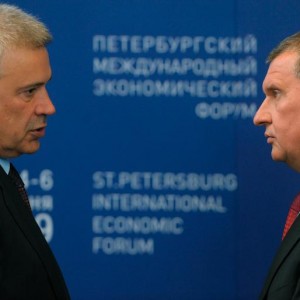 Foreign Minister Sergei Lavrov has asserted that there are no grounds to suggest Russia’s decision to fly Syria bombing missions out of Iran has violated U.N. Security Council regulations, after Washington described the deployment as ‘unfortunate’ and pledged to examine whether it constituted a violation of U.N. Security Council resolution 2231.  Officials in Iran say that there are no Russian troops stationed on Iranian soil, and Moscow’s use of an Iranian air base is for refuelling only.  Since its deployment from Iran, Iraq has approved the Russian air force’s use of its airspace if needed during airstrikes on Syria.  In bombing from Iran, Russia is ‘signaling to its adversaries that its mission in Syria had legitimacy and had been approved by other countries’, says RFE/RL.

The postponement of the Bashneft privatisation continues to make waves; its shares have plunged, and analysts continue to unpick the reasons behind it.  Rivalry between the two major bidders, Lukoil and Rosneft is one theory, as is a conflict among the elite as to how the assets would be divided.  The reason officially given is that the government’s focus should be on the selling a stake in Rosneft first.  Whatever the reasons, the consequences are clear: the Moscow Times says the postponement of the sale, which should have brought $4.9 billion to the state treasury, will instead ‘speed up the depletion of Russia’s rainyday Reserve Fund‘.   As the situation in Ukraine worsens, observers ponder if Russian sabre rattling is designed to send a message to the West, rather than its eastern neighbour, particularly with the G20 coming up.

The filming of Colin Firth’s forthcoming disaster movie Kursk, based on the 2000 submarine tragedy, has been delayed after the Russian defence ministry failed to provide a permit on time, amid suggestions that the government was thinking twice about providing access to classified locations and information.  Archpriest Vsevolod Chaplin of the Russian Orthodox Church caused significant controversy when he commented that Josef Stalin ‘did a lot […] There are some people you should kill’ , but apparently, he is not alone –  there is a whole trend of Church officials supporting Stalin.

PHOTO: The two heads of the oil majors bidding for the state stake in Bashneft — Igor Sechin of Rosneft and Vagit Alekperov of Lukoil. (Sergei Guneyev / RIA Novosti)