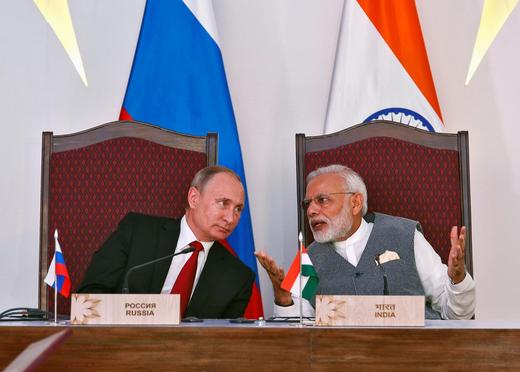 The Kremlin’s major Western news outlet, RT (formerly known as Russia Today), has accused its British bank, NatWest, of shutting down its accounts without explanation. RT called the ‘incomprehensible and without warning’ decision (under which the bank will withdraw its services in two months’ time) an attack on freedom of speech. One analyst speculated that it could be a kind of ‘veiled sanction’ to deter sources of anti-Western propaganda; the British government denies having had any influence on NatWest’s decision.  In a rare outburst, subsequently edited out of the official Kremlin transcript, President Vladimir Putin apparently told journalists in Goa on Sunday that Western sanctions could go ‘screw themselves’.  The State Duma is considering changing the law on military service to offer short-term contracts to Russians who have a particular passion to fight in specific wars (thereby effectively ‘formalising the status of unrecognized Russian mercenary forces fighting abroad’). Russia is offering eight hours of ‘humanitarian pause’ in Aleppo this Thursday to allow civilians to flee the city before it resumes its onslaught.

Rosneft, the new majority shareholder in Bashneft, will have until November 17 to buy out the company’s minority shareholders. (‘Only in Russia could a transaction between two state-controlled entities be dubbed a privatization,’ comments Reuters.) Bloomberg explains why Rosneft’s securing of a deal to takeover a refinery of India’s Essar is a tactical victory, but is likely to create a long-term price problem.  Exxon is a victim of ‘collateral damage’ from anti-Russian sanctions; it has lost over $1 billion already, and is continuing to suffer from a lack of large-scale projects, now that work in the Russian Arctic is off limits.  Ruslan Shamsuarov, the son of a high-ranking official at Lukoil, will avoid a prison sentence for a police car chase in which he drove through a children’s playground.  A whistleblower at a psychiatric hospital in Tatarstan could face criminal charges for speaking out about abusive practices at the facility.

The man accused of killing Anna Politkovskaya was reportedly pressured by ‘unidentified government employees’ to implicate Putin critic Boris Berezovsky in her death.  A new poll indicates that almost half of supporters of US Presidential candidate Donald Trump view Russia as an ally, compared with 19% of Hillary Clinton’s supporters.