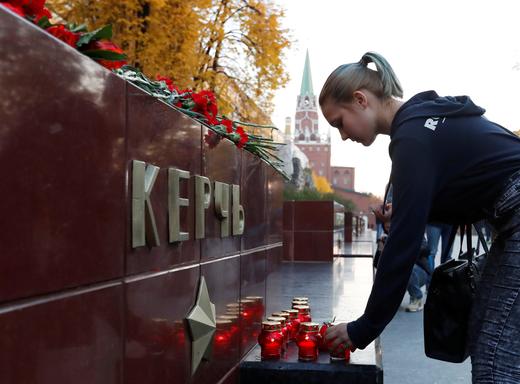 President Vladimir Putin held a moment of silence yesterday and local authorities have declared three days of mourning for the twenty people who were killed at a Kerch college in Crimea after an 18-year-old gunman opened fire on his fellow students after detonating an explosive device. The event was initially reported as a terrorist attack and National Guard troops were sent to protect other schools in the region as well as its bridge to mainland Russia; it is the worst incidence of school violence in Russia since the Beslan attack in 2004. Crimea’s Deputy Prime Minister has been detained on charges of taking bribes. US sanctions have severely hampered microchip company Angstrem-T, forcing it to be taken over by VTB bank and delayed the launch of an initiative under which it would have been creating substitutes for Western products. But sanctions have had no effect on the wealth of Russia’s ten richest tycoons. It is anticipated that further sanctions under consideration in the US could create major upheavals in the global energy trading system.

Foreign Minister Sergei Lavrov says UK investigative source Bellingcat is a front for Western special services seeking to manipulate public opinion. A new database of online trolling reveals 10 million tweets sent by Russian and Iranian misinformation campaigns aimed at creating unrest in the UK and US. Documents newly released show that Wikileaks founder Julian Assange was made a political counselor to the Ecuadorian embassy in Moscow in a brief attempt to extradite him from London last year.

Italy’s unpopular pro-Russia push could isolate it in the European Union, as almost all of the other members are pressing for stronger measures against Moscow. The Italian deputy prime minister however said that Rome would not veto any renewal of sanctions against Russia. “We can only play the veto joker once in Europe,” he said. Putin and his Egyptian counterpart capped three days of meetings by signing a strategic cooperation treaty covering arms trading and other ties, hailing “a new chapter in the history of our cooperation”.

PHOTO: A woman places a candle to commemorate the victims of a fatal attack on a college in the Crimean port city of Kerch, at a memorial by the Kremlin walls in Moscow, Russia October 17, 2018. REUTERS/Sergei Karpukhin