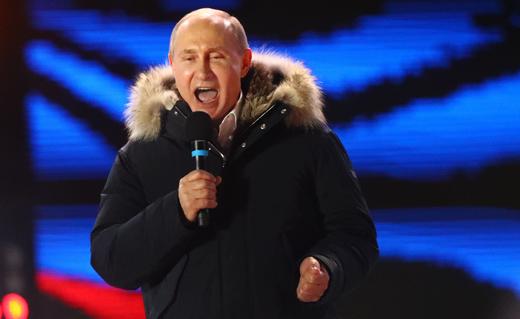 In an election result attributed by President Vladimir Putin to “the will of the people” exerting their “right to a free choice” Putin was re-elected by a landslide victory yesterday, thereby extending his 18-year-rule for another 6 years, until he is 71. He has already led Russia longer than Soviet leader Leonid Brezhnev. Putin “barely campaigned […] and faced no real competition.” Exit polls gave him almost 74% of the vote, with an alleged 60% turnout. Kremlin opponents alleged that voters were forced by their employers to gather evidence of their attendance at polling stations in order to keep their jobs. Other alleged violations include ballot-stuffing and camera-rigging, with independent monitor Golos receiving well over 2,000 reports of violations. Polling stations featured children’s entertainers and food stands. Following the announcement of his victory, Putin joined his supporters at his campaign headquarters in chants of “Russia!” Asked whether he would run again in 2030, Putin laughed. The New York Times compiled a list of key dates over the course of Putin’s rule.

Russia announced its tit-for-tat expulsion of 23 British diplomats in response to the UK’s expulsion of 23 Russian diplomats over the poisoning of former spy Sergei Skripal with nerve agent. Responding to Britain’s allegations that the Kremlin was behind the attack, Putin said, “It’s complete nonsense to imagine that anyone in Russia could resort to such tricks ahead of the presidential elections and World Cup. It’s unthinkable.” The British Foreign Secretary accused Russia of having been stockpiling the deadly nerve agent used against Skripal for a decade. British police have launched a murder investigation in the wake of the death of Nikolai Glushkov, a former associate of late tycoon Boris Berezovsky. Yevgeny Chichvarkin, the former Evroset mobile phone tycoon, is fearing for his own security following Glushkov’s death. British MPs are pushing for wealthy Russians to be forced to disclose their property assets in the UK.

In a debate a day ahead of yeserday’s vote, former presidential hopeful Alexei Navalny accused candidate Ksenia Sobchak (who garnered 1.43% of the vote) of being paid to run, and of being part of “the lying, falsifying scheme that barred me from the election”.