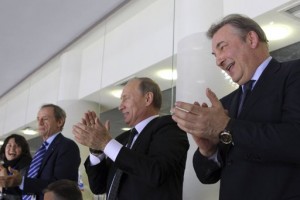 Investigators have ended their probe of the five suspects implicated in the 2006 murder of Anna Politkovskaya, sending the case to the Prosecutor-General’s Office, which will then go to a jury trial.  The remanding of whistleblower Lyudmila Popkova to a psychiatric hospital is ‘an increasingly common’ practice used against the Kremlin’s political opponents.  A raid has been conducted on Prime Minister Dmitry Medvedev’s Skolkovo business center, as part of an investigation into the possible misspending of $111 million in government funds.  This follows hot on the heels of the newly released video of Vladimir Putin slamming Medvedev’s cabinet for inefficiency, prompting a Putin adviser to suggest that ‘Medvedev’s problems are increasing because of his obstinacy and the inefficiency of his government.’  U.S. senator Ben Cardin who authored the Magnitsky List’s human rights sanctions against Russia said that ‘there would be no need for a list‘ if the Kremlin were to drop its posthumous case against Sergei Magnitsky and hold accountable those responsible for his death.  Cardin met with Magnitsky’s family in Washington yesterday.  RFE/RL interviewed another sponsor of the list, James McGovern, who says that the sanctions demonstrate that ‘human rights actually matter to the U.S. government’.

The owners of the fund that (possibly illegally, its owner has hinted) bought 48% of Vkontakte yesterday have close ties to the Kremlin.  Reports are emerging that the social network’s founder started experiencing problems with the authorities after initially refusing to take down opposition or protest pages on the site.  Lawmakers in Dagestan voted to cancel governor elections in favor of letting President Putin to choose its next leader.  Reuters reports that $1.2 billion has already been pulled from Russia-focused equity funds this year due to investor concerns about a slowing economy.  Igor Sechin is the only Russian to make Time’s 2013 list of the world’s top 100 most influential people this year, thanks to his ‘informal’ leadership of the siloviki.

Authorities are seeking the arrest of two nurses accused of severely beating three young children in an orphanage earlier this month.  On the ‘flowering’ Russian career of an anti-American American.