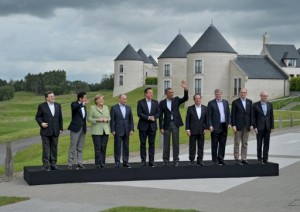 The G8 summit meeting’s conclusions on Syria are to pledge $1.5 billion in humanitarian aid and support for further talks ‘as soon as possible’.  President Vladimir Putin’s stance prevented any further consensus, says The Guardian, but Putin denied reports that he was the ‘odd man out’ at the conference – ‘Russia was never left to defend its approach to the Syrian problem on its own.’  Bloomberg says Putin’s agreement on a statement calling for the establishment of a ‘transitional government’ puts more pressure on Bashar al-Assad.  Foreign Minister Sergei Lavrov stated that Russia is ‘categorically against’ any peace conference involving ‘a public act of capitulation by the [Syrian] government delegation’, and Putin did not rule out the possibility of new arms contracts with Assad.  But Canadian Prime Minister Stephen Harper said the final result represented ‘a real shift’ by Putin in calling for an end to the fighting.  Police in Moscow raided the home of Oleg Navalny, the brother of Alexei Navalny, in connection with charges of corruption and money laundering: ‘all the documents which contained figures were seized’.  All 13 defense witnesses at Alexei Navalny’s KirovLev trial have been barred from testifying.

Prime Minister Dmitry Medvedev has pledged to shut down controversial activist target the Baikal Pulp and Paper Mill: ‘there is no way back’.  A court in St. Petersburg has overturned a former ruling about a site containing the remains of an ancient Swedish fortress, making it a cultural heritage protection site and thereby scoring a victory for activists who did not want Gazprom to erect its planned 400-meter skyscraper there.  In an early reading of the bill to ban adoptions by same-sex couples, the vote passed unanimously, and is widely anticipated to sail through its next reading and pass in the upper house.  Putin is to consider proposals for new versions of official history books to be taught in schools. ‘This is a battle for the future.’  Never mind about stealing a Super Bowl Ring, what about the $30 billion of funds missing from Olympic coffers, asks Dave Zirin. ‘[T]hese winter games will go down in history as perhaps the most audacious act of embezzlement in human history.’

Russia has begun delivering its $1 billion arms package to Azerbaijan.  The Investigative Committee has opened a corruption inquiry into Andrei Kalmykov, deputy CEO of Aeroflot, regarding the alleged issue of contractual privileges to a company affiliated with his relatives.  As part of a Kremlin plan to ‘create another player’ in telecoms, it may sell its 53% stake in Rostelecom to its domestic rivals MTS, MegaFon and Vimpelcom.  Miner Mechel is launching a share buyback of up to $100 million.

Roughly 6,000 people have been evacuated from a village near the Chapaevsk military depot in the Samara region due to a fire caused by exploding shells.  Viktor Vekselberg explains why he spent $100 million on nine Fabergé eggs.