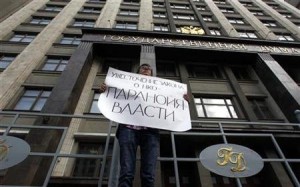 U.S. President Barack Obama and Vladimir Putin had a telephone meeting after a rebel bomb killed Syria’s defense minister and leader Bashar al-Assad’s brother-in-law.  Russia has promised to block the United Nations’ latest attempts to level sanctions against Syria, saying that it doesn’t want to support the rebel movement.  U.S. senators have voted unanimously for a bill that would repeal the Jackson-Vanik Amendment and establish permanent normal trade relations.  The finance committee of the U.S. Congress has reportedly included the controversial Magnitsky Act in the bill, with the WSJ saying that Republicans will not pass the bill unless the Magnitsky Act is attached.

The law forcing foreign-funded NGOs to label themselves as ‘foreign agents’ was passed yesterday, part of what one commentator calls ‘possibly the most odious series of bills in the history of the country’s lawmaking’.  A State Duma deputy says that the controversial law will only affect organisations that are lobbying for political change. ‘Those working to change the traffic code or any other law will not be affected.’  Other new measures include rigorous laws against posting links to ‘extremist’ content, increased punishment for slander, and fines of up to $10,000 for participating in unauthorised protests.  Anatoly Lysenko, the new chief of public television appointed by Vladimir Putin, says he would be willing to work with opposition leader Alexei Navalny. ‘The opposition is in fact a part of society. And its point of view must be present.’

Responding to BP’s news that it had received a number of indications of interest in a stake in TNK-BP, AAR, BP’s Russian partners in the joint venture, have made an official offer to increase their holding to up to 100%.  The offer has led to new disagreements, with BP denying AAR’s claims that TNK-BP provides 90% of BP’s dividends.  Bloomberg says that TNK-BP has paid $19 billion in dividends since 2003.  Belarus and Russia have signed a deal allowing Russian companies to build a $10 billion nuclear power plant in the Grodno region.  Moscow wants Belarus to reconsider the $30 billion price tag on mining giant Belaruskali.

PHOTO: A lone protester demonstrates against the reading of a new law requiring foreign funded non-governmental organisations working in Russia to disclose details of their activities, outside the Duma, Russia’s lower house of parliament, in Moscow July 6, 2012. REUTERS/Maxim Shemetov