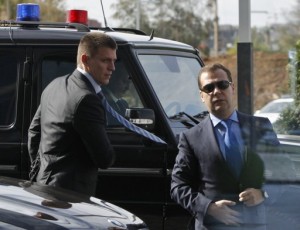 At the Kremlin’s request, the United States will close its USAID office in Russia by the end of this month.  U.S. officials said they ‘regret’ the decision but are committed to finding new ways of promoting democracy without it.  The Moscow Times suggests that the move is a result of the Kremlin’s ‘reeling from unprecedented protests among the middle class since disputed State Duma elections in December’.  Vladimir Putin has slammed officials for failing to follow through on certain of his election promises, mainly in regional development and social services.  Some reports say that Putin’s ire was directed at Prime Minister Dmitry Medvedev.  Analysts doubt that revision of the repatriation programme will significantly affect migration.  Details of Russia’s debt deal with North Korea have emerged: the former has agreed to write off 90% of the $11 billion Soviet-era debt and make a $1 billion re-investment.

Russian access to YouTube could be blocked over access to a video mocking the Islamic world, thanks to a new law coming into effect in November, which ‘allows authorities to block entire sites over offensive content on a single page’. The prosecutor general has already deemed the video ‘extremist’, and is seeking a court ruling to have it banned.  In the wake of Gennady Gudkov’s ouster, a deputy from A Just Russia says that United Russia’s Duma deputies are resigning from management positions in commercial companies and amending their declarations. ‘United Russia members refute the allegation that they are trying to cover their tracks.’  A new survey of the super-rich suggests that they think Russia’s business climate is deteriorating, and that corruption is on the rise.

A priest who spoke out in support of Pussy Riot has already resigned over the girls’ treatment, and has now also been defrocked by the Orthodox Church: ‘He says the case demonstrates the church cares more for President Putin and the government than the needs of its believers’.  Yesterday’s Sberbank 7.58% share sale raised $5.1 billion, valuing the bank overall at roughly $70 billion.  Russia’s revelation about its trillion-carat industrial diamond stash hidden in a meteor is drawing questions about whether or not the diamonds will be cost-effective to mine.

PHOTO: Russia’s Prime Minister Dmitry Medvedev (R) arrives at the Skolkovo Hypercube, the first constructed building of the Skolkovo Innovation Center, to attend a meeting on the development of medical industry in Moscow, September 18, 2012. REUTERS/Maxim Shemetov