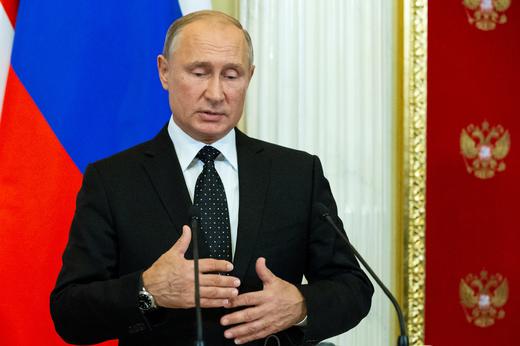 The Kremlin announced that the Russian plane that disappeared over the Mediterranean was shot down inadvertently by allied Syrian forces, but blamed Israel specifically. Defence Minister Sergei Shoigu said he held his Israeli counterpart responsible, slamming Israel’s “irresponsible and hostile” actions. Spokesman Dmitry Peskov said the Kremlin was “extremely concerned by this situation”, and President Vladimir Putin’s initial response was that the Israeli air force acted in violation of its country’s sovereignty. But Putin then toned down his official response, following a remorseful phone call from Israeli Prime Minister Benjamin Netanyahu, and finally described the incident as “a chain of tragic accidental circumstances”; Israeli fighter jets were apparently using the Russian plane as cover from Syrian government fire. Netanyahu told Putin that Syrian forces were to blame, but offered to help with the investigation of the incident. This piece argues that National Guard chief Viktor Zolotov’s bizarre personal video address to Alexei Navalny earlier this month, in which he challenged him to a duel, reveals Zolotov’s “lack of access to Putin”.

Pussy Riot activist Pyotr Verzilov would likely have died in Moscow last week after a suspected poisoning if he had not received prompt medical treatment, according to his doctors in Germany.  They also said that the rapid onset of symptoms and absence of any obvious cause made it “highly probable” that Verzilov was poisoned. Original Pussy Riot member Nadezhda Tolokonnikova believes it was either an attempt on his life, or a warning. “No one who is taking part in political activities in Russia right now can really be safe,” she said. Activist Yekaterina Nenasheva was detained last week for locking herself in an animal cage outside of the Federal Security Service building to protest torture. The two million metric tons of industrial waste in landfills outside of St Petersburg is a threat to residents’ health, according to the head of the Security Council and a presidential envoy.

Polish President Andrzej Duda told Polish television that US President Donald Trump could theoretically halt the Nord Stream 2 gas pipeline project. “The decision is in the US president’s hands,” he said. Rosatom will soon begin building two nuclear reactors in Hungary. Lukoil has begun its $3 billion share buyback programme. Anti-doping leaders want WADA to postpone its decision on whether or not to reinstate RUSADA.