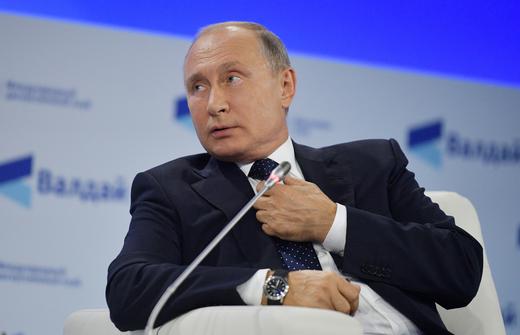 President Vladimir Putin gave his annual foreign policy address yesterday at the Valdai forum. He talked up positive relations with Asia and the Middle East and bragged of Moscow’s advanced nuclear capabilities, but ruled out “preemptive nuclear strikes”, saying that Moscow would only use its nuclear arsenal defensively. Were this to be a necessary event, he acknowledged a “global catastrophe”, but that, as the victims of aggression, Russia would “get to heaven as martyrs”. Putin also spoke on the killing of journalist Jamal Khashoggi, commenting that there is not enough information about his death to give Russia justification to harm relations with Saudi Arabia. Independent newspaper Novaya Gazeta’s chief editor received a basket containing a severed goat’s head yesterday, one day after it received a funeral wreath naming journalist Denis Korotkov, known for his reports about Russian mercenaries in Syria. As 20,000 people gathered in Crimea for a funeral service to mourn the 21 people killed during this week’s mass shooting at a college in Kerch, Putin blamed the event on globalization which allowed the influence of similar US shootings to spread via the Internet (“as strange as that may seem,” he said).

State-controlled banks may be allowed to use their dividends to boost their own capital instead of paying them to the government. The Central Bank is reporting an increasing amount of non-dollar deals by companies experimenting with reducing dependence on the dollar as a response to US sanctions. Exxon Mobil is in discussions with Russia over potential new energy projects, despite the threat of the US extending current sanctions. A shipyard in China is refusing to finish repairs on a stranded Russian container vessel due to sanctions concerns. Russia may use money from the National Wealth Fund to start construction for a nuclear power plant in Egypt. Rosneft plans to invest 600 million euros in the German downstream market.

Opposition leader Alexei Navalny responded to National Guard head Viktor Zolotov’s challenging him to a duel, saying he accepts, and that his choice of weapon is live televised debate. All 17 Russian nationals and officials charged in Spain a decade ago with money laundering, fraud, and ties to the mafia, have been cleared, with the court citing lack of evidence.