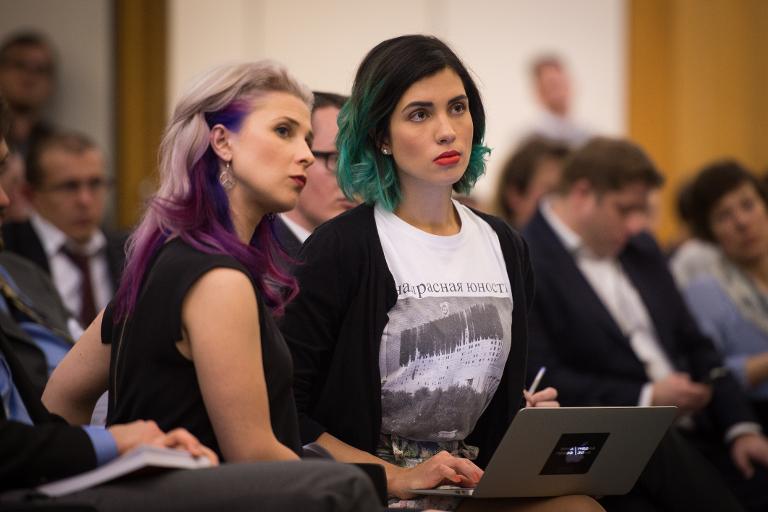 President Vladimir Putin says the United States wants to ‘subdue’ Russia, but vows that it will never succeed.  Putin’s spokesman, Dmitry Peskov, says Russia is asking Nato for ‘a 100% guarantee that no one would think about Ukraine joining Nato’, because the alliance has made Moscow nervous.  Nato is warning of a ‘serious’ Russian military build-up in eastern Ukraine, and calling once again on Russia to pull back its troops.  The European Bank for Reconstruction and Development blames Russia’s imminent recession on the Ukraine crisis.  Finance Minister Anton Siluanov says Russia will see a recession next year if the oil price drops to $60 a barrel and the West intensifies current sanctions; Economy Minister Alexei Ulyukaev painted a similarly grim picture of the economy at a Kremlin economic meeting last month.  Newly passed legislation will tighten reporting requirements for the offshore income of Russian citizens, making it subject to taxation for the first time, and possibly making Russian-owned, foreign businesses more vulnerable to pressure by bringing them under Russian law.  The new law is expected to hit hard in the business community, and to face strong opposition from individuals and companies alike.  Organic farmer Boris Akimov says food sanctions blocking Western imports to Russia have forced people ‘to think more about where their food comes from’.

The Central Bank bought about 150 metric tons of gold this year – double its 2013 purchases.  The bank’s chairwoman, Elvira Nabiullina, defended the recent action to let the ruble float, saying that the move had already helped the currency avoid new record lows; but she admitted that the bank has no control over the exchange rate.  Vladimir Putin says the bank has made the right decision in floating the currency.  The Moscow Times has compiled a list of Russia’s biggest economic mistakes.  Rosneft boss Igor Sechin is expected to pressure Opec to cut crude production when the cartel meets in Vienna next week, raising the possibility of group action to restore oil prices.  Ukraine’s Naftogaz is aiming to avoid using its interim gas deal with Russia for as long as it can, with a long-term goal of ending reliance on Russian gas altogether.

A journalist is to be charged under the ‘homosexual propaganda’ law for running an online support group for LGBT teenagers.  Aleksei Venediktov, the chief editor of Ekho Moskvy radio station, says he is prepared to make an offer to purchase the station.  Russia’s mystery space object may be a satellite chaser.  Reindeer police?