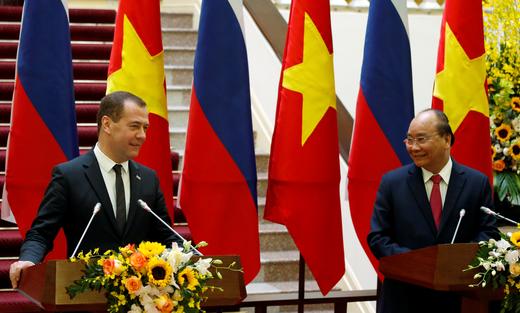 Investigators in St Petersburg have opened a criminal case into the pollution levels of the Novaya river, which are 5,400 times higher than the acceptable limit. Forbes responds to reports that Alexander Prokopchuk, a long-serving member of Russia’s Interior Ministry, will be elected the new president of Interpol this week. The piece argues that Russia is one of the more blatant abusers of the Interpol system, that Prokopchuk bears the greatest responsibility for this abuse, and that if his presidency is confirmed, it will only be because a majority of nations want to misuse it in the same way. Leonid Bershidsky discusses last week’s ECHR ruling in favour of Alexei Navalny, the years of harassment the opposition leader has faced, and the likelihood that he will be “one of the last Russians to have recourse to the European court”, given hints that Russia will exit the Council of Europe.

Speaking at the APEC summit in Papua New Guinea, Prime Minister Dmitry Medvedev warned against growing protectionism and called for transparent trade rules. Medvedev agreed with his Vietnamese counterpart to triple bilateral trade to $10 billion by 2020, and to strengthen energy ties. Russia’s economic underperformance since 2013 cannot be explained solely by the price of crude, argues a new report, claiming that waves of economic restrictions imposed on Russia since its annexation of Crimea have undoubtedly left their mark.

Tensions between the Orthodox Churches of Ukraine and Russia are increasing since Constantinople’s decision to grant independence to the Ukrainian church, with talks on both sides of asset-grabbing schemes and Molotov cocktails.