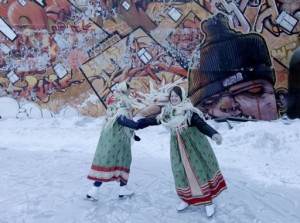 Russian officials are using the case of Russian Max Shatto, who died under the care of his American adoptive parents, to justify the recent controversial ban on U.S. adoptions. ‘That decision was undoubtedly, absolutely correct.’  The Investigative Committee has opened a criminal case into the boy’s death and is seeking the arrest of the child’s adoptive mother.  The U.S. is urging restraint on the matter until the circumstances of Shatto’s death have been revealed.  President Vladimir Putin says that Russia cannot acquiesce to a U.S. court decision ordering the return of historic books and documents to the New York-based Schneerson library, arguing that it would make the country vulnerable to endless other claims on state property. He also claimed that the court’s decision was ‘illegal’, but offered to place the disputed documents on display in a Jewish centre in Moscow.  An ‘influential’ consulting group says that Moscow Mayor Sergei Sobyanin is one of the few politicians capable of succeeding Vladimir Putin. ‘In the eyes of the elites, Sobyanin has an established, positive track record. They see him as a mediator who can safeguard their interests.’  Alexei Navalny’s work in exposing nearly $2 million in undeclared foreign real estate owned by State Duma deputy Vladimir Pekhtin puts ‘Pekhtin, the ruling party, and the Kremlin in an extremely uncomfortable position’.  As a result, and in a bid to protect his party, Pekhtin has decided to step down from his post.

Prime Minister Dmitry Medvedev is in Brazil today to discuss weapons and nuclear cooperation, and to visit Brazil’s Glonass monitoring station, where it hosts part of the Russian version of GPS navigation.  The system may eventually be used to conduct research at the University of Brasilia, where students yesterday held an anti-Russian demonstration to protest Medvedev’s visit.  The central bank says that nearly $50 billion left Russia illegally last year, blaming half of this sum on ‘one well-organised group of people’.  Amid increasing talk of China seeking more Russian oil and gas, Energy Minister Alexander Novak says Russia will not boost its energy exports to Asia at the expense of exports to other regions.

Former defense minister Anatoly Serdyukov is reportedly not cooperating with the Investigative Committee regarding the Oboronservis fraud case.  Opposition activist Leonid Razvozzhayev has been placed in solitary confinement for five days as punishment for breaking regulations at his detention centre.  A visa-free 2014 Olympics for Europeans in Sochi is looking unlikely.  Metals tycoon Vladimir Potanin, praising ‘the renaissance of philanthropy in Russia’ has become the first Russian to join Bill Gates and Warren Buffett’s Giving Pledge campaign, which encourages the world’s richest people to give half of their fortunes to charity.