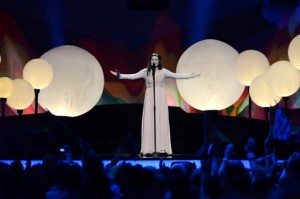 A sanctioned gay rally held in St. Petersburg on Friday lasting just 15 minutes was attacked by skinheads with smoke bombs, with Orthodox Christian activists reportedly outnumbering gay protesters two-to-one.  A further rally planned to be held in Moscow this week has been denied permission by the authorities. ‘Every year, they find a reason to reject it.’  A Levada Center Poll conducted to mark the International Day Against Homophobia found that almost half of Russians think homosexuals should have diminished rights, 38% believe that gay people should receive medical treatment, and 13% think they should be prosecuted.  The European Union is appealing to Russia not to adopt a nationwide law banning ‘gay propaganda’,  part of a wider critique of the country’s human rights record, following a meeting with Russian officials in Brussels.  America’s top military officer condemned an ‘ill-timed’ Russian shipment of defence missiles to Syria, warning that it ‘will embolden the regime’.  Israel also expressed alarm over the news.  Russia has expelled former U.S. Embassy official Thomas Firestone, possibly for turning down an invitation to spy for the intelligence services.  The Federal Security Service has revealed the identity of the C.I.A.’s station chief in Moscow, a breach of protocol likely to cause anger in Washington.  Alleged C.I.A. spy Ryan Fogle (the story has been profiled in The Independent) has left Russia, having been ordered to do so.

The Supreme Court has agreed to hear an appeal against the second conviction of jailed former Yukos head Mikhail Khodorkovsky.  The father of anti-corruption blogger Alexei Navalny has been summoned for questioning at the Investigative Committee.  The mother of another prominent blogger (and emigre), Rustem Adagamov, had her home searched by investigators last week.  Rock musician Andrei Kovalyov has been implicated in the bribery scandal involving Rosbank head Vladimir Golubkov.  An arrest warrant has been issued for the head of Synertech over the theft of state funds during the development of the Glonass satellite network.  RFE/RL reports on Gazprom’s ‘profound strategic crisis’, allegedly brought on by ‘inflexible, unwavering and shoddy policies’.  The developer of Rosneft, Igor Sechin, and Transneft head Nikolai Tokarev have had a public clash over pipeline extension plans.

Russia is apparently in the process of developing a terrorist-seeking robo-cop, despite rights organisation claims that ‘such weapons would not be consistent with international humanitarian law’.  Brian Whitmore’s newest ‘Power Vertical’ podcast discusses the Kremlin’s loss of Vladislav Surkov: ‘Maybe Putin needs a weak government to make steps in some very unpopular directions.‘  Filmmaker Alexei Balabanov has died aged 54.

PHOTO: Dina Garipova of Russia performs the song “What If” during the final of the 2013 Eurovision Song Contest at the Malmo Opera Hall in Malmo May 18, 2013. REUTERS/Jessica Gow/Scanpix Sweden