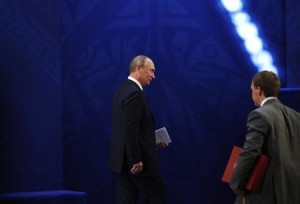 British Foreign Secretary William Hague says that a Russian ship thought to be carrying attack helicopters has been halted on its way to Syria, after the ship’s London-based insurer, Standard Club, under pressure from British officials, withdrew its coverage.  Russia’s Defence Ministry denied earlier reports that it had sent a warship to Syria.  U.S. President Barack Obama says that both China and Russia recognise the danger of civil war in Syria, despite not having agreed to any plans to remove President Bashar al-Assad.  British Prime Minister David Cameron says President Vladimir Putin has made it ‘explicit’ that he is not invested in Assad’s rule, although Foreign Minister Sergei Lavrov said Cameron’s remarks were inaccurate.  RFE/RL looks at Russia’s strategic interests in Syria’s Tartus deep-water port.  Prime Minister Dmitry Medvedev made a visit to Chechnya yesterday, pledging support for its development and claiming the health of the region as a government priority (the region could receive $52.2 billion in funding through to 2025).  The Governor of Moscow, Sergei Shoigu, has spoken out in support of activists defending a forest in Zhukovsky which is being razed to clear a path for a road to Medvedev’s National Aviation Center.

Vladimir Putin says that the death of Sergei Magnitsky was a ‘tragedy’, but promised retaliation from Moscow if the U.S. goes ahead with a bill that would penalise Russians for alleged human rights abuses.  The proposed bill is facing resistance from the Obama administration and the vote has been delayed.  The U.S. administration wants to distinguish between any potential adoption of a Magnitsky blacklist and the repeal of the Jackson-Vanik amendment.  Speaking at the G20 summit, Vladimir Putin and Indonesian President Susilo Bambang pledged to increase cooperation and said that the two countries have ‘rather confidential relations’.

The European Court of Human Rights has dismissed a complaint by Yabloko relating to coverage of the 2003 parliamentary election campaign.  Georgy Bovt writes on the recent ‘reconciliation’ between Novaya Gazeta editor Sergei Solokov and Investigative Committee head Alexander Bastrykin.  Yulia Latynina says the reconciliation couldn’t have taken place without protests by fellow journalists and intervention from Vladimir Putin.

Police are searching for suspects after a tourist bus in Moscow was sprayed with pellets from a pneumatic pistol.  The Moscow Times profiles the town of Klin, in Northern Moscow.