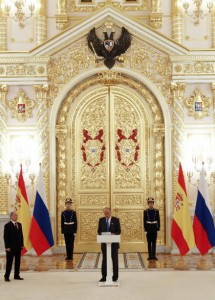 The U.S. has condemned Russia and China’s latest veto of Syria sanctions (their third) as ‘highly regrettable’ – the Guardian has an international summary of yesterday’s Syria-related events.  The White House has responded by voting on an amendment to its defence spending bill that will bar contracts and agreements with Rosoboronexport, which arms the Syrian government.  Vladimir Putin’s aide is being vague about whether or not Russia would take in Bashar al-Assad.  Putin has expressed caution over new laws that have opened up the political system, warning that ‘we have to allow all those who want to express their opinions to do so in a legal way and not run around in city squares’.

The Central Bank may dilute state control in Sberbank and VTB with additional share issues, an ‘indication that strong forces remain committed to obstructing privatization’.  U.S.-based private equity group Cartesian Capital is making a rare foreign investment into Russia, teaming up with the Russian Direct Investment Fund to help it increase its stake in the Micex-RTS exchange.  Cartesian says that political risk is ‘less relevant’ in deals involving the Micex.

Socialite and activist Ksenia Sobchak is taking investigative authorities to court in a bid to get back $1.7 million in cash seized from her apartment during a raid.  Beware the new NGO law, says Michael Bohm, United Russia could use it to crack down on major, democratically-focused media outlets.  John Freeman writes about the political convictions of the activist members of Voina who formed the Pussy Riot punk protest act.  The Moscow Times interviews ‘icon’ of the human rights movement, Lyudmila Alexeyeva.

Two Islamic leaders have been targeted in Tatarstan, and one has died, in what Putin called ‘a serious signal’.