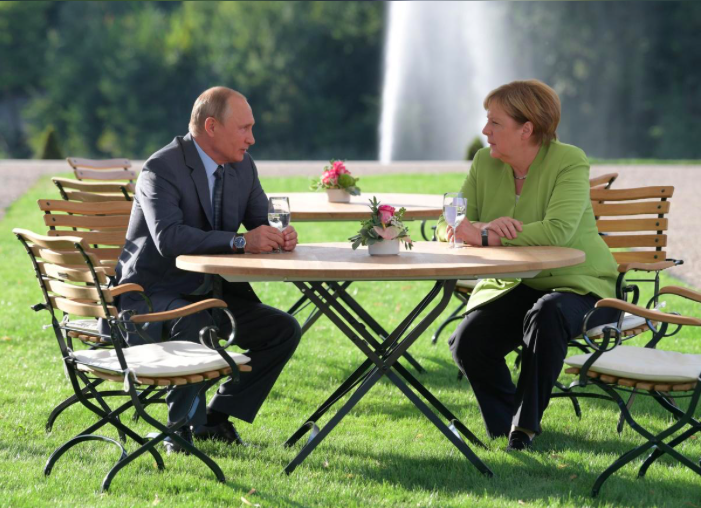 President Vladimir Putin met with German Chancellor Angela Merkel this weekend for extensive three-hour talks on Syria, Ukraine, Iran, and the Nord Stream 2 gas pipeline. On the latter issue, both agreed that it is “absolutely wrong to politicize” this “purely economic project”. Putin said that the Syrian refugee burden on Europe made it urgent that measures are taken “so that they can return home”; Germany and Russia’s nuclear accord with Iran will be preserved. No actual agreements or official statements came out of what the Kremlin called “very serious and detailed” talks, but relations now apparently stand on a more pragmatic ground. Just prior to his Germany visit, Putin caused a stir by attending the Austrian Foreign Minister Karin Kneissl’s wedding, appearing in a wedding video montage, waltzing with the bride and giving a speech toasting the couple’s happiness. According to the Guardian, Kneissl was appointed to her position by the far-right Freedom Party which has a cooperation agreement with Putin’s United Russia party. Putin called the wedding “a private visit”; Kneissl’s office listed it as a “working visit”. Ukraine said the invitation invalidated Austria’s role as a mediator in the conflict in eastern Ukraine, and Austria’s Green MEP said Kneissl’s invitation to “the most aggressive foreign adversary of the EU” was unacceptable. The Kremlin said it would not accept the criticisms. Is Serbia being forced to choose between NATO and Russia? Belarusian President Alexander Lukashenko’s dramatic cabinet reshuffle suggests an anticipated drop in Russian oil revenue.

The latest probe by Alexei Navalny’s Anti-Corruption Foundation focuses on State Duma Speaker Vyacheslav Volodin, claiming that he has millions of dollars worth of assets held in his mother’s name. Jailed Left Front leader Sergei Udaltsov has been hospitalised five days into his hunger strike, for dehydration. Three top executives at the Energia Rocket and Space Corporation have been arrested on suspicion of fraud. An abandoned building previously used as an office of the Federal Migration Service, which became defunct in 2016, was found abandoned, full of passports and personal documents, sparking an investigation into negligence. The Orthodox Chuch’s bid for ownership of the Golden Gate UNESCO-site is raising questions about the church’s growing property portfolio.

Anastasia Vashukevich, also known as Nastya Rybka, the Belarusian escort who claimed she had information linking Russian oligarch Oleg Deripaska to the election of Donald Trump, and who has been in pre-trial detention in Thailand since February, says she will not speak of it further. RFE/RL’s Majlis Podcast focuses on what’s next for the Caspian Sea Agreement. A former comedy writer at RT’s London television studio writes about his stint working at the controversial channel as a “useful idiot”.