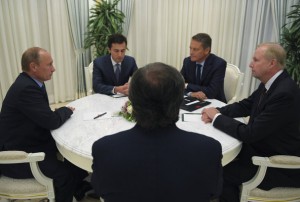 Russia said that it ousted the U.S. Agency for International Development (USAID) because it had attempted to ‘influence political process, including elections’ by distributing grants.  Lyudmila Alexeyeva talks about USAID’s past work with the Moscow Helsinki Group and says the news will have ‘very sad consequences’.  Bob Dudley, the CEO of BP, met with President Vladimir Putin and Rosneft CEO Igor Sechin in Sochi yesterday, indicating that a long-running dispute over BP’s ‘vital’ joint venture in Russia could be resolved.  Few details of the meeting have been released, but the discussion strongly indicates that ‘BP could eventually be given access to Russia’s Arctic fields as part of a deal that will see it sell its 50 per cent stake in TNK-BP to the state-controlled energy giant Rosneft’.  Sources anticipate that BP will acquire at least 12.5% of Rosneft, if the deal is conducted through an exchange of cash and shares.  Rostelecom announced that they have barred customers in the Omsk region from accessing YouTube after receiving a warning from prosecutors, under the new federal law on extremism, regarding a controversial anti-Islam clip.  Sberbank president German Gref rounded up the bank’s $5.2 billion stake sale, saying that it has ‘opened the gates for privatization in this country’.

Putin is visiting the Kyrgyz capital Bishkek, where he will write off Kyrgyzstan’s $500 million debt.  ‘Times change but relations between our people invariably stay good.’  Finance Minister Anton Siluanov says that the President’s decrees are government priorities, and that the Ministry is ‘shifting around the budget to find resources for them’.  The Natural Resources and Environment Ministry has called an emergency meeting to discuss road-building in the Murmansk region.

A St Petersburg lawmaker is asking the city governor to limit media coverage regarding the possible end of the world in 2012, amid fears that it will lead to increases in crime and suicides.  A Ukrainian court has ruled that the government must pay $380 million to Russia to compensate for the debts of United Energy Systems.