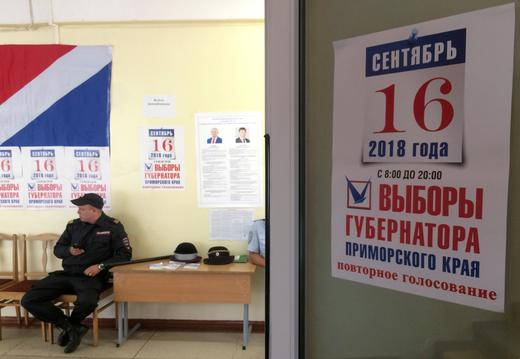 Election authorities in Primorye have voted to annul the results of last weekend’s gubernatorial elections after reports of vote-rigging and violations in connection with the suspicious loss of Communist party candidate Andrei Ishchenko to the United Russia incumbent, Andrei Tarasenko. Ella Pamfilova, head of the Central Election Commission, recommended that a new vote should be held within three months. Masha Gessen writes on the suspected poisoning of anti-Kremlin activist Pyotr Verzilov, revealing that at the time he was taken ill, he had been working on an investigative piece about the three Russian journalists murdered in the Central African Republic.  The chief of Danske Bank has resigned following the bank’s release of a report on $234 billion worth of money-laundered cash flowing through the bank’s Estonian branch from Russian individuals and Russian-owned companies. The Kremlin has earmarked $24 billion for infrastructure projects over the next three years. President Vladimir Putin has just handed a state-owned oil company to Chechen leader Ramzan Kadyrov.

The New York Times considers the confusing character of RT’s interview with the Sergei Skripal poisoning suspects, arguing that it was not meant to convince, but “to deliver a message to foreign critics and domestic foes that nothing you say or do will change anything”. Russian internet users have faced legal charges for posting memes mocking religion, but homophobic comments made online are going unpunished. Poland says Nord Stream 2 is a “huge threat”; Germany still sees it as a primarily commercial venture. Oil producer Surgutneftegaz is urging buyers to pay for their oil in euros instead of dollars “apparently as insurance against possible tougher US sanctions”.

Ukraine is planning to break its treaty of friendship with Russia tomorrow, originally signed in 1997. The city of Lviv has banned “Russian-language culture products” in public places, prompting an indignant response from the State Duma.

PHOTO: A policeman guards a polling station during the gubernatorial election in the far eastern city of Vladivostok, Russia September 16, 2018. REUTERS/Yuri Maltsev/File Photo