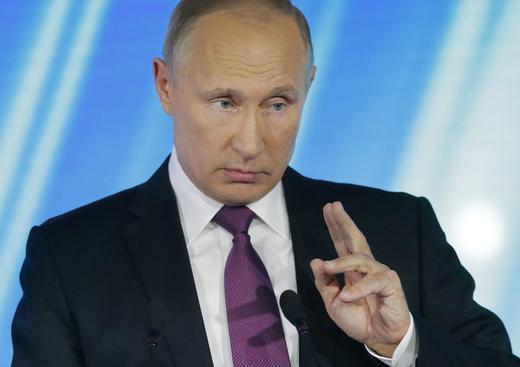 TODAY: Putin expresses high hopes for the economy and ties with the US, says Russia will develop weapons to match those of other countries as needed, and that the UN needs reform; still has not said whether he will run next year; Central Bank blacklists Otkritie employees; Rosneft chief says oil here to stay, no plans to buy Lukoil.

Speaking at the Valdai Discussion Club, President Vladimir Putin made a number of comments about domestic and international affairs. He said he hoped that the economy will no longer be impacted so harshly by falling energy prices and sanctions, and anticipated that the economy would rise by 2% this year (hot on the heels of the World Bank’s prediction, which was almost identical). He said that plans to expand cooperation with Saudi Arabia would continue despite its ties with the US, and then accused the US of conducting an unprecedented anti-Russian campaign in which it blamed all of its domestic failures on Moscow. He vowed to meet the US tit-for-tat if they quit a landmark Cold War intermediate-range nuclear forces treaty, but that overall he is hoping for increased cooperation. There was also some discussion of Moscow’s readiness to develop new nuclear and non-nuclear weapons in response to unnamed other countries which may do the same. He said that Russia wants the United Nations to remain “the center of the global system”, and that there is currently no alternative, but that the organisation needs some gradual reforms.  He also believes that Russia’s main mistake in Europe has been too much trust.

Putin still has not said whether or not he will run in next year’s presidential elections. The Moscow Times wonders who is paying for Ksenia Sobchak’s presidential campaign, given that it will cost at least $17 million; it is anticipated that most of the funds will come from bid business “as is common for the majority of candidates backed by the Kremlin”. The Central Bank has blacklisted more than 120 employees of embattled bank Otkritie. Rosneft chief Igor Sechin says that oil is not going anywhere for another 2 – 3 decades at least, and that rumours about the “death” of oil are “highly exaggerated”. He said there are no plans for Rosneft to buy its rival Lukoil. City Hall has been pushing some exceptionally positive PR for Moscow Mayor Sergei Sobyanin. A Russian poet is under investigation for hurting atheists’ feelings. A Labour party politician in the UK is calling for an investigation into Russia’s possible involvement in this year’s Brexit vote.

Al-Jazeera reports on the influence of Christianity in Russia, including a new law, backed by the Orthodox Church, decriminalising domestic violence. Putin could solve the Ukraine crisis if he followed Lenin’s complex legacy, says Serhii Plokhy. “[Lenin] managed to bring Ukraine back into Moscow’s fold after it declared independence in 1918, but the price he paid for doing so seems excessive to present-day Russian opinion makers.” Natalia Antonova explains why the Harvey Weinstein case is problematic for Russians. Artist Pyotry Pavlensky has been charged with property damage in France after setting fire to a central bank building.

PHOTO: Russia’s President Vladimir Putin delivers a speech during a session of the Valdai Discussion Club in Sochi, Russia October 19, 2017.