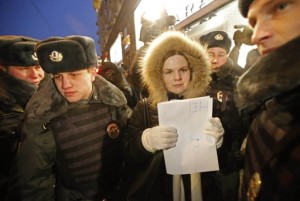 Russia’s lower parliament has given ‘preliminary but crucial’ approval to an amendment in the the Dmitry Yakovlev bill banning the adoption of Russian children by U.S. citizens.  The bill needs to pass through one more reading tomorrow, after which it could come into force as early as January 1.  A further measure under the same bill is that U.S.-funded NGOs involved in political activity in Russia will come under a direct ban.  The entire bill is part of what Dmitry Peskov called a ‘tough, emotional’ response to U.S. implementation of its Magnitsky List, which targets human rights violators.  Children’s Rights ombudsman Pavel Astakhov applauded the bill, saying that it is ‘shameful to export children’.  An Ekho Moskvy reporter calls the Duma deputies ‘morons who only do what their leaders tell them’.  Alexei Navalny has suggested that President Vladimir Putin will speak out against the adoption ban, giving everyone a chance to ‘praise his wisdom’.  15 people were detained outside the State Duma for protesting against the Dmitry Yakovlev bill.

A group of eight human rights organisations is calling on the European Union to raise concerns about Russian human rights at tomorrow’s summit meeting, including fines and pressure on opposition activists and new anti-homosexuality laws.  Police searched the apartments of two opposition activists in Voronezh yesterday over their possible connection to a coup plot.  The Economist looks at recent pressures faced by anti-government protesters.  Vladimir Putin is apparently unhappy with a new luxury limousine designed for him by ZiL.  The eruption of the Plosky Tolbaichik volcano in Kamchatka could continue for at least two more weeks.  The lava (click for video) destroyed a tourist campsite but no one was injured.  The Baikal Pulp and Paper Mill, a major target for environmentalists, has been declared bankrupt.

Transneft has vowed to sustain crude oil exports to the West next year, despite increased Asian exports.  Freight firm Globaltrans is to buy freight operator MMK-Trans for $225 million, evidence of the liberalisation of a market previously dominated by Russian Railways.  Sberbank has announced its plans to buy the online payment service Yandex.Money, a bid to expand its digital presence.  A report by a U.S. watchdog estimates that Russia lost over $150 billion in the outflow of illegal capital from 2001 to 2010.