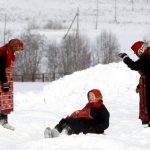 The U.N. Security Council’s Western members are toning down the draft statement backing Kofi Annan’s drive to end violence in Syria in a bid to win Russian support, after Sergei Lavrov said that Russia would support a statement that contained no ultimatums.  Lavrov has been making attempts to distance Moscow from the Assad regime, saying that the Syrian President had made ‘very many mistakes’.  A Russian Orthodox official says that God ‘has already judged’ punk band Pussy Riot and ‘is now waiting for their repentance.’  Orthodox nationalists have apparently called for the group members to be publicly flogged.  Canada has issued a warning to gay travelers visiting St. Petersburg, recommending that they do not show affection on the streets.  The Washington Post reports on the municipal election in Yaroslavl, where anti-graft and non-United Russia candidate Yevgency Urlashov is leading the polls with the campaign slogan ‘return the city to the people’.  The WSJ reports on the activist Ilya Yashin, who has ‘made a career of tweaking Vladimir Putin’s regime’, and Russia’s virtual opposition.

Dozens of new allegations of police brutality in Kazan are emerging, causing ‘major embarrassment’ to Interior Minister Rashid Nurgaliyev, who was charged with overseeing Dmitry Medvedev’s police reforms.  Two further police officers from the Dalny police station where Sergei Nazarov was tortured have been detained over new allegations.  Dmitri Peskov, Vladimir Putin’s spokesman, responds to a question about the imprisonment of protesters by saying that ‘if you contradict the law, you have to be locked up.’  A case has been opened against a former Novaya Gazeta correspondent for a blog post about protest which prosecutors allege ‘call[ed] for riots’.  A court in Siberia has dismissed an appeal to ban an edition of the Bhagavad Gita.  A court in Moscow has upheld a decision to classify Scientology books as extremist. Dmitry Medvedev is calling for the Russian military to be ‘fully armed’ by 2017 to counter U.S. missile defence plans.

Parnas remains barred from participating in elections despite its lawyers claims that registration denial is a violation of the European Convention on Human Rights; new legal measures to ease registration restrictions for parties generally will make ‘no difference’ to the party’s efforts.  An EU lawmaker suggests that A Just Russia should adjust its party platform by taking anti-government protesters’ demands on board.  Russia’s visa facilitation pact with the U.S. could be stalled until early next year, after the next U.S. presidential election.

PHOTO: Alevtina Byagisheva (L), 54, Zoya Dorodova (C), 74, and Valentina Pyatchenko, 74, members of the singing group “Buranovskiye Babushki”, play in the snow at a folk museum near the village of Ludorvai in the central Russian region of Udmurtia March 16, 2012. REUTERS/Sergei Karpukhin