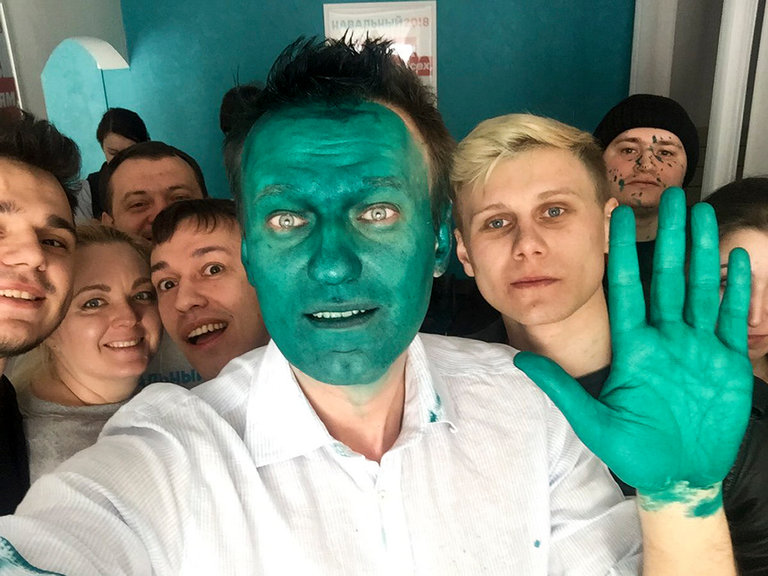 TODAY: Guardian unveils details of massive, global money-laundering scheme linked to the Kremlin; FBI announces formal investigation into Russia-Trump pre-election ties; investigation launched into death of Roscosmos official; site of Nemtsov shrine to be closed off for the summer for “bridge repair”; Navalny doused with green paint on campaign trail; European University at St. Petersburg will have license revoked.

The Guardian has published an extensive report on a global, Russian-led money-laundering operation thought to be worth $20-80 billion, with links to the Kremlin and KGB, which saw UK banks processing nearly $740 million of laundered cash. The operation has been dubbed “the Global Laundromat”. One former banker is quoted in the report as saying, “Money laundering is the biggest business in Russia.” The former governor of the Chelyabinsk region has been charged with taking roughly $450,000 worth of bribes from the region’s Minister of Health. FBI Director James Comey has confirmed that the bureau is investigating ties between Russia and last year’s election campaign for Donald Trump. Kremlin-backed media outlet Sputnik has compiled a selection of the “most insane” statements from the US congressional hearing on spy allegations against Russia. The Investigative Committee has opened a criminal case into the death in prison of former Roskosmos official Vladimir Yevdokimov, who had been moved to a cell without CCTV cameras a month before he was stabbed.

The shrine to honour murdered opposition politician Boris Nemtsov outside the Kremlin, which has bee repeatedly raided, torn down, and rebuilt by his followers since his death, will become a construction site this summer, ostensibly so that the bridge can undergo repairs, but opposition campaigners say the move is designed to get rid of the memorial once and for all. (Triumfalnaya Ploshchad, once a popular spot for anti-Putin rallies, was the subject of a similar strategy in 2010.)  Opposition leader Alexei Navalny was doused with green liquid by an unknown assailant yesterday, during a campaign visit to the Siberian city of Barnaul. Navalny made light of the event, saying that, once he realised it was not an acid attack, he felt like a superhero. The liquid, known as “zelyonka”, is sold as a harmless antiseptic but is infamous for being difficult to wash off. An opposition blogger who doused himself in green paint in solidarity with Navalny was detained by police, who told him that his paint job was against the Red Square’s rules of conduct.

Russia favourite Marine Le Pen is leading the polls in the French presidential race. Ukraine will almost certainly ban Russia’s Yulia Samoylova from taking part in the Eurovision Song Contest. The prestigious European University at St. Petersburg has had its license revoked, following a decision by Rosobrnadzor regarding the vaguely-defined labor category of “instructor-practitioners”.

PHOTO: Alexei Navalny, a prominent Russian opposition leader, taking a selfie with supporters after an unknown assailant doused him with green liquid in Barnaul, Russia. (Alexei Navalny, via Associated Press)