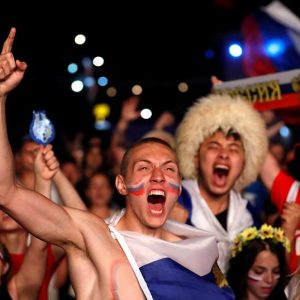 With Alexei Navalny calling for July 1 protests against pension reform, the Yabloko party planning one in Moscow for July 3, and the Communists and various trade unions organizing demonstrations in a range of cities in upcoming weeks, it may be possible to speak of a major “consolidated protest”, says opposition leader Sergei Udaltsov. Soccer commentator Leonid Slutsky has announced he will no longer comment on World Cup matches for Russia’s largest state-run broadcaster, just days after mentioning the word “Navalny” live on air. Despite having approval from FIFA, an Iranian women’s activist protesting against her country’s rules on women attending football matches was detained, searched and had her banner confiscated before the Iran-Spain match. Banned FIFA president Sepp Blatter’s visit to Russia for the World Cup is entirely “private”, as are any meetings he might hold, the Kremlin has been quick to assert. Human Rights Watch has affirmed that pressure to improve workers’ rights and tackle forced labor in countries like Russia and Qatar in their preparations for the World Cup must continue after the end of the event.

67% of Russians polled by the All-Russia Public Opinion Center have apparently experienced no impact of anti-Russian sanctions. Domestic seafood production has flourished in the years since sanctions were introduced: Russia’s oyster harvest increased by 265 times in the past three years. RFE/RL reports on a bill on the teaching of native languages in Russia that representatives of many minority peoples consider a threat to their cultures. The head of Germany’s BfV domestic intelligence agency believes that  Russia was probably behind a widespread cyber attack on German energy providers. Igor Sechin, the CEO of Rosneft, has noted that the global oil industry successfully navigated its way through the year 2017, the period of “most acute instability” for the sector, but insists that sanctions must be abandoned for it to develop fully.

The Committee to Protect Journalists has called upon Russian to “carefully investigate” the circumstances behind stomach injuries sustained by blog editor Aleksandr Valov while in detention. The way in which the World Cup has unfolded so far has given no sense of Russia’s international isolation, notes Reuters (despite some problems with beer supply). The mood of jubilation has been helped by the fact that, after a decisive match between Uruguay and Saudi Arabia, Russia will advance to the next stage of the competition.