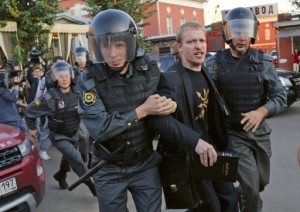 The Kremlin is holding firm on its orders that USAID end its Russia-based operations by October 1, denying Hillary Clinton’s request for an extension.  Russia is adamant that ‘[t]he decision has been made, and the decision of a sovereign state should be carried out in full.’  A spokesperson for the Foreign Ministry insists that, as the U.S. administration were informed about the move in June, their portrayal of it as a surprise is a distortion of events. ‘In principle, everyone understood and knew about this problem’.  Defending against allegations that USAID tried to affect political process in Russia, a U.S. State Department spokesperson says that United Russia participated in some of the agency’s programmes, and that they did not only benefit opposition groups.  Prime Minister Dmitry Medvedev defended his cabinet against yesterday’s accusations from President Vladimir Putin. ‘When I worked as president, I never liked [the budget] either.’  This article looks at the various measures made during Medvedev’s rule that have since been reversed by Putin’s government; his moving Russia to permanent summer time will also be reversed.  The Polish President has urged his Ukrainian counterpart to decide whether to align with the E.U. or join a Russian-led customs union. ‘It is impossible to implement these two scenarios at the same time.’  The decision to write off nearly $500 million of Kyrgyzstan’s debts in exchange for various military and energy deals ‘reinforce[s] the Kremlin’s influence in Central Asia’.

Nine Orthodox activists were detained by police for trying to block public access to a Moscow exhibition of modern icons, inspired by art collective Pussy Riot.  The BBC has video of the demonstration.  Aung San Suu Kyi said the group should be allowed to sing ‘whatever it is they want to sing!’ unless it was ‘nasty to other people […] governments don’t count as people.’  A British coroner says that an inquest will be held into the death of Alexander Litvinenko early next year, and will hear allegations that he was murdered by the Russian state.  But the British government has ordered ‘potentially vital information’ about whether Litvinenko had links with its intelligence services to be withheld from the inquest.

The Guardian picks apart BP’s anticipated sale of half of TNK-BP to Rosneft: ‘BP shareholders are unlikely to applaud wildly if their company really does intend to accept $10bn of Rosneft paper as part-payment for the TNK-BP stake.’  Another report suggests that it could pave the way for more deals: ‘It’s a potential feather in the cap for Bob Dudley and allows the company to spread their wings in joint ventures where the terms aren’t so onerous.’  Coal miner Raspadskaya says it incurred a net loss of $19 million for the first half of 2012, citing weak demand.  Potash producer Uralkali has signed settlements to grant it exit from a U.S. antitrust case.  Novatek will use European gas to supply German utility EnBW, allowing it to build up a market in advance of starting to produce its own LNG from 2016.